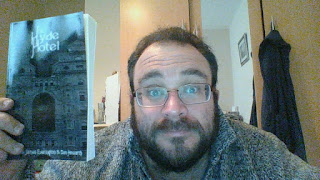 The Hyde Hotel Welcomes You…
The Hyde Hotel looks almost exactly as you’d expect it to: a faceless, budget hotel in a grey city you are just passing through. A hotel aimed at people travelling alone, a hotel where you know so little about your fellow guests that they could be anyone… and where, perhaps, so could you. But sometimes things are hiding in plain sight, and not everyone who stays at The Hyde gets a good night’s sleep…
Enjoy your stay.

Also, here I am with Haunts Of Horror, formerly known as Houses On The Borderland. Edited by 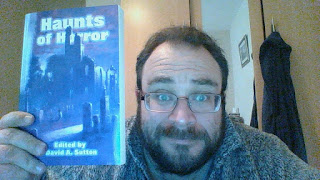 David Sutton, the original of this suffered a non-release via the British Fantasy Society in 2008 and pretty much sank without trace. Now it's getting a new lease of life thanks to David's own Shadow Publishing imprint!

Houses on the borderland of madness and horror! “Houses are where we live, eat, sleep, love, dream. Houses are our private worlds, the places we find shelter from a cruel universe. But houses are also the venues of horrors and nightmares” Six terrifying novellas by top horror authors Allen Ashley - Simon Bestwick - Paul Finch - Gary Fry - Samantha Lee - David A. Riley.A seaside home, a school, a fantasy castle, a lighthouse, a wooden hut, a run-down tower block — all are tainted by an abnormal atmosphere. Be wary of what’s beyond the entranceway. For we have six dwellings eager to molest the human spirit at its lowest ebb, its most vulnerable time. Welcome… please step across the threshold…

In other news, it's a little under three months now before Cate and I tie the knot. Yes, that's right: marriage. Feels like only yesterday that I popped the question. :)

Livia Llewellyn, who Lowdowned for this blog last year, has a new collection out called FURNACE, and it's gonna be epic. Hie ye to Amazon and buy thereof.

The Spectral Press fallout continues to... well... fall out, sadly - see this post from Gary McMahon.

An article of note this week was this one from Chuck Wendig. I hate HuffPo articles anyway because my laptop always ends up freezing up when I'm trying to scroll down them, so I never finish reading the bloody things. However, I won't be even trying to read the Huffington Post after this little gem:

Don’t write for Huffington Post. Don’t even share links to there. They’re so profitable by not paying writers? Fine. Demand they pay their writers and until they do, don’t click their links, don’t share their links, don’t speak their name while wearing anything other than a Mister Yuck face. Starve them of content and they will see how precious it is to them.

And I'll just add this, since it never gets old.

Okay, at the end of the month, voting closes for the British Fantasy Awards. The longlist currently includes my eligible work from 2015:

If you read and enjoyed these, and believe they're worthy of consideration for your vote - well, then, you know what to do.