Thana Niveau on The House of Frozen Screams and Octoberland 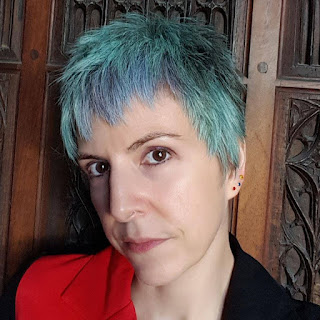 This year's Fantasycon will be a major event for the fantastic Thana Niveau, as it sees the launch of both her new short story collection Octoberland (PS Publishing) and her debut novel, The House of Frozen Screams (Horrific Tales0. So I thought I'd ask her a few questions about them. And about writing. And things.

1) Are you a Planner or a Pantser?

Bit of both! I’m definitely not an outline-the-whole-project writer, as half the joy for me is seeing where the story and characters lead me. I usually start with an image or a character and then start writing to see what happens. Obviously this means cutting a lot of false starts and side quests, but sometimes these brainstorms get repurposed in other stories. Only very rarely does an idea come to me fully formed, where I visualise an entire story. Names, however, do get obsessively planned. Sometimes you can spot their significance and other times they’ll only have meaning for me.


2) Do you aim for a set number of words or pages per day? If not, how do you mark progress on your work?

I’ve tried to do the word count thing, but it feels constricting and tends to stifle my creativity. If I’m up against a deadline, forcing a set number of words per day can help, but sometimes I’ll find myself piling on the adjectives near the end purely to hit the target, stuff I’ll just delete the next day. If I’m feeling uninspired, I’ll jump to a moment I really want to write, or follow a whim, knowing it might lead nowhere. So a set daily word count isn’t terribly useful for me. As for marking progress, I suppose I just have some abstract concept of how long the story will be, what percentage I’ve written, and how much further there is to go.


3) Are there any themes or subjects you keep coming back to?

Definitely! There was a Facebook game a while back: “You know you’re in a ___ story when…” That was fun because I’d never really noticed how many pet themes I have. I write a lot about siblings who are very close, as well as father/daughter relationships. The sea features in quite a few stories, and very often the water itself is a character. I also love to get into the POV of abstract things or ideas - like the burgeoning sentience of AI or bodiless aliens in space who have no language. I’m good at making the writing really difficult for myself sometimes! LOL But these are the kinds of ideas that fascinate me and inspire me to write in the first place. 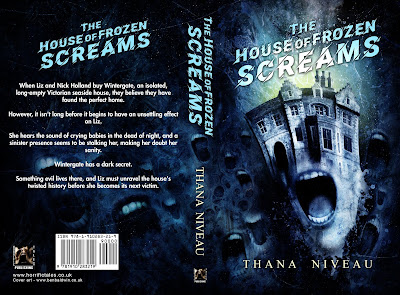 4) If you had to sum up your novel The House of Frozen Screams in a sentence, what would it be?

Nick and Liz are happily married and don’t want children. But the house they’ve just moved into does.


5) What was the genesis of The House of Frozen Screams?

Shirley Jackson’s The Haunting of Hill House is one of my all-time favourite books, and I love the relationship Eleanor has with the house. I wanted to explore the personality, motives and history of a haunted house of my own, and the effects it has on its occupants. What would a house want and why?


6) What was the biggest difference, for you, between writing short stories and writing your first novel?

Well, it’s technically not my first novel. LOL There’s the one I wrote years ago that went through the whole acceptance/editing/proofs process with a very dodgy publisher who then vanished into thin air. For years the book was “available” on Amazon even though it didn’t exist, and I was finally able to get them to pull the listing. I was so disillusioned by the experience I haven’t looked at it since. But I think about digging it out sometimes, updating and rewriting it.

But sorry - I got off on a tangent! I’m definitely more of a novel reader. I do love reading short stories, but I prefer the immersive experience of a novel. And I prefer living in one single world for extended periods as a writer as well. But I have too many shorter ideas not to get them down first, which pushes all my longer ideas to the back of the queue. Some ideas are clearly only short story ones; that is, a novel couldn’t sustain them. But many of them feel like whole worlds I could explore further, and I find myself saddened that I can’t. I often have to trim them to fit a given word count. With The House of Frozen Screams, I found myself having to check the instinct to trim, to “get to the point” of a scene more quickly because I was going to run out of space. It was a real luxury to have the room to spread out and explore everything in the story.

7) Octoberland is your second full-length collection. How do you think it differs from your first, From Hell To Eternity, and from your micro-collection, Unquiet Waters?

Octoberland collects more recent stories than From Hell to Eternity, so (hopefully) my writing has grown and matured. I think I was a lot more confident with the stories in Octoberland as well, much more willing to take chances.

Unquiet Waters features four connected stories, and the theme I chose was water. I’ve written a lot of stories about the sea, diving, snow, a drowned Earth, etc. So those ideas run through all three collections, and I can think of at least three more stories out there in anthologies that are set in the ocean.

8) What’s your favourite story from Octoberland?

Oh, that’s a tough one. “The Calling of Night’s Ocean” is one of my very favourites. (That’s the one that’s partly written from a dolphin’s POV.) But the title story “Octoberland” is special to me as well. There’s quite a lot in it that’s not fiction. Dani Serra’s cover art beautifully illustrates the mood I was aiming for: “gothic Bradbury”.


9) If you could put one piece of work into a time capsule for the future, what would it be?

Definitely one of my SF stories, just to see if my apocalyptic visions came to pass! I think I’d choose “And Fade Out Again”, which is set in a future flooded Earth, with the remnants of humanity living in a sunken city grown from the Eden Project in Devon. (It’s in Great British Horror vol 2: For Those in Peril, from Black Shuck Books.)


10) What does the future hold for Thana Niveau?

I’ll continue to dream of uploading my mind into an android body while I expand my SF writing. I’ve been toying with the idea of a new pseudonym for SF, and keeping “Thana Niveau” purely for horror.

I have two separate SF novels in the works, but in between I’m also writing several horror short stories. (It’s hard to say no when you’re invited!) In addition, I’m working on a Midnight Movies monograph about one of my all-time favourite films: The Descent. But my desktop is littered with works in progress because I find it difficult to focus only on one project at a time. This is why I need a biotech upgrade!

Thana Niveau was born to the wail of the Wendigo and the whisper of warp engines. She is a Halloween bride, sharing her life with fellow scribe John Llewellyn Probert, in a crumbling gothic tower filled with arcane books and curiosities. And toy dinosaurs.
Messages from the beyond: thana.niveau * gmail * com
Posted by Simon at Sunday, September 30, 2018 No comments: