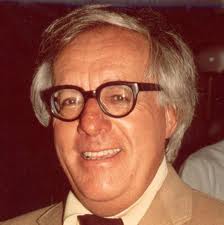 Two things happened on Wednesday, 6th June 2012.  Over in Los Angeles, a 91 year old man who I never met and who I’m sure never heard of me passed away.  And I shed tears.

The two events are linked.

The man’s name was Ray Bradbury.

I can’t quite remember where I first read his work; most likely in one of Richard Davis’ Space anthologies.  Or maybe one by Peter Haining; two great editors of my youth, also long gone to the great bookshop in the sky.  The first story of his I read might have been ‘A Sound Of Thunder’, ‘The Veldt’, ‘All Summer In A Day’ or ‘And There Will Come Soft Rains.’  And then of course there were the tales of his that popped up in horror anthologies, like the Fontana Horror books or those lovely, alliterative volumes edited by Helen Hoke: tales like ‘The Emissary,’ ‘The Homecoming’, ‘The April Witch.’

To me, Bradbury was always at his greatest as a writer of short stories- even though I loved Fahrenheit 451 and Something Wicked This Way Comes.  And there are volumes upon volumes of his short fiction out there: The Illustrated Man, The Machineries of Joy, The Golden Apples of the Sun- and, probably my favourite, The October Country.  Certainly that collection contains my favourite Bradbury story, ‘The Scythe.’  An impoverished family- relatives, maybe, of Steinbeck’s Joads- their car running out of fuel in the middle of Depression-era America, find a farmhouse.  In it lies a dead man, a stalk of wheat from the field outside clasped in his hands, and a note leaving the farm to whoever finds his body.  And Drew, the father, finds something else, propped in a corner: a scythe.

If you haven’t read the story, god forbid I spoil it for you.  Bradbury would rise from his grave and get me.

No-one wrote quite like him, before or since.  There was a combination of childlike innocence, of energy and passion, of imagination, and most of all, of language.  Not playing arid, clever-clever games with words, but using them, loving them, delighting in them.  And never at the expense of narrative or ideas.  I learned from Bradbury that in a good story, language, ideas and narrative should be inseparable, impossible to separate one from another.

Bradbury could conjure up a scene, a spaceship, a setting, an idea, a character, a ravenous dinosaur, a mood or a monster in an instant, with splendidly evocative prose.  Not in a subtle way.  He was a very American writer in the best sense of the word- exuberant, big-hearted, open, laying what he thought or felt out in front of you to take or leave as you liked.

I could go on, but I think I’m starting to fall into the trap of so many writers who fall under Bradbury’s spell; trying, almost without meaning to, to imitate his tumbling, lyrical style.  And of course, you can’t do that.  Only one man ever really could.  And now he’s gone.

Even though it had to come- Bradbury had, by any definition, lived to a ripe old age- it still doesn't seem possible. Ray Bradbury has always been there; I grew up with his stories. He was one of the finest, most original and distinctive voices in fantastic fiction; if I ever write anything as lyrical, as thought-provoking, as inspiring and as impossible to mistake for any other writer’s work, I will have achieved more than most writers ever can.

His work was warm and always human; his words flowed with a musical beauty that no-one could ever imitate.  And his ideas dazzled.

The man is gone, but the stories remain.  This is something I always try to tell those who will listen when they’re busy having slanging matches on message boards or dicking about on Facebook (I keep trying to tell myself when it comes to that last, but hey, it’s a work in progress.)  When all the bullshitting and the message-board squabbling, all the self-promotion and the jockeying for awards, the bitching about who won and who didn’t win an award, about who was or wasn’t on the fucking shortlist- when all of these are gone and forgotten, ghosts in the electronic ether or footnotes in some obscure journal, what remains, what matters, what it’s all about, is one very simple thing.

Harlan Ellison- a writer who, like Bradbury, still refuses to write on anything but a typewriter- tells us in his postscript to ‘The Museum on Cyclops Avenue’ about how it was written on a typewriter left to him by his good friend Robert Bloch, who had died earlier that year.  (‘The Museum on Cyclops Avenue’ is, incidentally, a work of warm and lyrical fantasy that could almost have been written by Bradbury himself- almost, because no-one, not even Harlan Ellison, was Ray Bradbury.)

Ellison concludes his postscript with just four words that pay all the tribute, for those with eyes to see, that needed paying to Bloch’s memory.  Or that Bradbury himself.  Or that of any of those writers who, like him, plow their own furrow and sing their own song, whether anyone listens or not: The work goes on.  It goes on in writers of that same persuasion; the ones who’ll never give up.  The ones who were inspired by them to do the same; the ones who carry on the flame.

RIP Ray. I'm a better writer and human being for your work; so are many others.  The work goes on.


(This is a slightly rewritten version of a tribute that appeared on the This Is Horror website on Wednesday.  Thanks to Michael Wilson for inviting me to contribute.)