The Fear of God

After many months' delay (all my fault, I hasten to add) the new instalment of my This Is Horror column Heretic Songs is up.  It's called The Fear Of God and it's about faith and religion in horror and real life.  You can read it here.
Posted by Simon at Thursday, February 28, 2013 No comments:

Labels: heretic songs, Oh god he's loose somewhere else on the interweb as well, this is horror 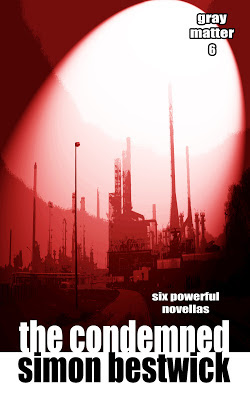 My new collection, The Condemned, will be released by Gray Friar Press around the end of March this year as part of their 'Gray Matters' series of novellas.

The Condemned contains six novellas and novelettes, including the BFA-nominated The Narrows, which was reprinted in Best Horror of the Year #1, and The School House, originally published in Houses On The Borderland.

The other tales, Dark Earth, A Kiss Of Old Thorns, The Model and Sleep Now In The Fire, are all previously unpublished. The collection will be released in paperback and a hardback limited edition; the hardback will contain an additional short story, 'Made Of Clay.'

As if this wasn't enough to put a smile on my face, some truly excellent writers have provided blurbs for the collection. From Alison Littlewood (author of A Cold Season and Path Of Needles):

'Simon Bestwick writes the kind of fiction that gets under your skin and stays there . . . thoughtful, tense and genuinely scary, his short stories lead you into dark places and then blow out the candle. His next collection is set to be a must-read of the genre.'

‘Simon Bestwick has penned some of the downright eeriest fiction I've ever read. But there is nearly always a hard, urban edge to it, and a deep political awareness. This is an author who bleeds onto the page when he's writing. He really believes in what he's doing. It's his passion and his mission, and as such his meaningful brand of horror is raw, shocking and right in-yer-face. Potent stuff, on so many levels.’

And another from Joseph D'Lacey:

And to crown it all, the great Ramsey Campbell has this to say:

'Simon Bestwick is among the most important writers of contemporary British horror. His work is rooted in unflinching social observation, and his supernatural tales have a real moral resonance. He's living proof that horror fiction can talk about the way we live today and shine an uncanny light on life, which throws its darkness into sharper relief.'

Many thanks to Ramsey, Joseph, Paul and Alison, and to Gary Fry at Gray Friar; as you can imagine, I am a happy chappie. :)
Posted by Simon at Monday, February 04, 2013 1 comment: