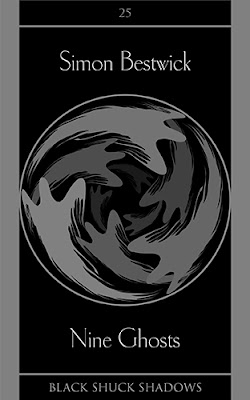 I have a new mini-collection coming out from Black Shuck Books.

There are nine stories.

There are nine ghosts.

Two of the stories have never been published before.

Two others have only appeared on my Patreton.

You can find more details here.

I meant to do a live launch on Facebook, as I did for A Different Kind Of Light. Unfortunately Facebook has currently blocked me from livestreaming. I have no idea why.

Luckily I can livestream through my YouTube channel. So that's what I'll be doing at 7.00 pm GMT on Friday 26th March.

There'll be a live reading, a Q&A and a chance to win a couple of copies.

So be there or be square.

The nine ghosts await you.

(PS: I've invited as many people to the event via Facebook as I can, but I was only able to send a limited number of invites. So do please spread the word if you possibly can, or if you know anyone you think might enjoy this.)

Things of the Week 12th March 2021: Breaking the Hundred, Redwater, Contributor Copies and Out of the Darkness 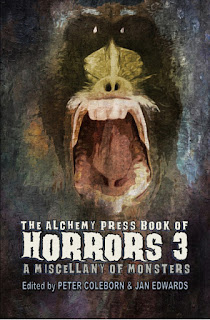 I've had an up-and-down couple of weeks in mental health terms, which hasn't been much fun, but I've managed to keep writing throughout, although at times it's been a case of grinding it out. Nonetheless, stuff has got done, and stuff has happened.

The last novel I completed in first draft, Tatterskin, was finished on 24th November. Since then I've been trying to complete the next novel. I've started two and ended up having to lay both aside as I ran into blocks and problems. Hopefully I'll be able to go back to them, figure out where I was going wrong and pick up the thread again at some point in the future.

Meanwhile, though, the new book is coming along. I have no idea what it's about, or if it's any good, but I'm doing my best not to think about that and just write the next right thing in the story. I recently broke the hundred-page mark, which always feels like a milestone. But I've got that far before with at least one of the projects I've laid aside by now, so I'm trying not to be overconfident. So, we'll see.

I'm taking a break from the novel in any case, for a couple of weeks, as there a couple of short stories I want to get written. With any luck, it'll still be there when I get back.

Other news: well, I'm delighted to say that my story 'Redwater' has been accepted for The Alchemy Press Book Of Horrors 3: A Miscellany Of Monsters. More information on this anthology when I have it. 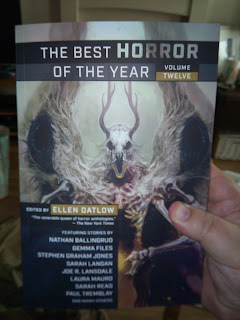 Also, I was delighted to receive my contributor's copy of The Best Horror Of The Year #12, which includes my story 'Below' from Terror Tales of North West England. Many thanks to Ellen Datlow, and to Jason Katzman at Skyhorse Publishing. It's got stories from amazing writers like Catriona Ward, Joe Lansdale, Laura 'Bricklauncher' Mauro and Gemma Files (with 'The Puppet Motel', which also appears in her storming collection In That Endlessness, Our End.) Along eith many more. I've only savoured a couple of the stories so far, but I'm looking forward to reading the rest.

Finally, I'm glad to finially be able to announce my involvement in Out Of The Darkness, edited by the most excellent Dan Coxon and published by Unsung Stories. In one way or another, all the stories in the anthology tackle themes of mental health, and are written by authors with experience of those issues. One additional impact of the COVID-19 pandemic has been a massive spike in mental health problems: all author fees and royalties will be donated to Together For Mental Wellbeing. 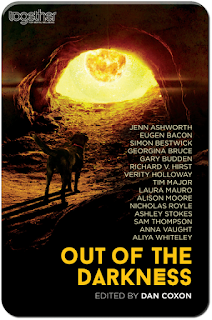 I've never made any secret of my own experiences with anxiety and depression, so I was proud to be asked to contribute. My story 'The Hungry Dark' will appear alongside contributions by authors including Laura Mauro, Nicholas Royle, Tim Major, Aliya Whiteley and many more.

The anthology has already met its initial Kickstarter goals, but it's now chasing new targets, hoping to add more authors to the anthology. If you'd like to support Out Of The Darkness, you can still contribute to the Kickstarter here.

You can read more here, at Ginger Nuts Of Horror, where Dan talks about the background to the anthology.

Have a good weekend, folks. 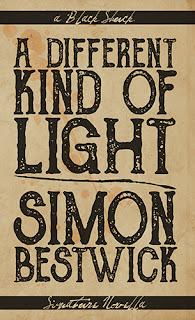 Normally, I try to list the various things (hopefully nice ones) that the week has had in store, but this week-and-a-bit (various things popped up on Friday and over the weekend that stopped me blogging earlier) has actually been pretty packed, and in the best of ways.

So here's the latest.

The launch party for A Different Kind Of Light ran into a few technical hitches, and in the end it ended up just being me reading and presenting (big thanks to Laura Mauro and Keris McDonald, who were to have read on the night), but ended up being a great laugh and getting a few people to rush out and buy a copy. It's the closest thing I've come to hanging out with many of my friends on the horror scene in a very long time, so that was great as well.

The first reviews for A Different Kind Of Light have also appeared. Over at Marc's Books, Marc Francis sums it up with "Well worth spending your hard-earned cash on," which is, after all, what every writer wants to hear people say! And at Ginger Nuts Of Horror, Tony Jones' verdict is: "A terrific novella which sits nicely amongst the best work Simon Bestwick has written and Black Shuck have published. Outstanding and highly recommended."

You can buy A Different Kind Of Light here.

In other news, Nine Ghosts, my upcoming mini-collection (from Black Shuck Books, again, because they rock!), originally slated for an October release, will in fact be out later this month. I have some proofs to check this week. More details to follow.

Way back when I was starting out as a writer in the late 1990s, I published a number of stories with a great little magazine called Nasty Piece Of Work, edited by the wonderful David A. Green. David was open to stories that were both gruesome or extreme on the one hand, and cerebral and intelligent on the other. I did some of my best work from that period of my career for Nasty, some of which might not only never have found a home without it, but never have been conceived.

One such story was Welcome To Mengele's, a story about a brothel where you can make your sexual fantasies - whatever they are - a reality... for a price. It was reprinted in my second collection, Pictures Of The Dark, but has been out of print for a long time. I'm delighted to announce it'll be appearing in Ellen Datlow's upcoming body horror anthology Body Shocks, alongside stories by Ray Cluley, Gemma Files, Livia Llewellyn, Caitlin R. Kiernan, Priya Sharma, Tananarive Due, Tom Johnstone and many, many more wonderful authors. Hugely proud to be included. 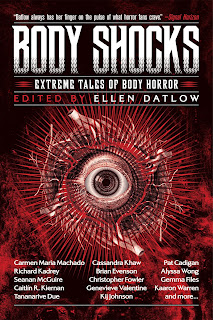 Paula Guran, editor of The Year's Best Dark Fantasy And Horror, has published her recommended reading list from the first volume online, and I get name-checked twice, for the title novella from my collection And Cannot Come Again and for my Terror Tales Of North West England story 'Below', which went on to be reprinted in The Best Horror Of The Year #12. Cate is also listed for her Terror Tales Of North West England story 'The Mute Swan.'

Finally, I'm over the moon to announce that my novella Devils Of London has found a home at Hersham Horror, courtesy of that excellent gentleman Peter Mark May, and should be out later this year. All being well, quite a bit of my stuff should be seeing print...

So that's what's been going down, anyway.

Hope you're all well, and see you soon. Keep safe.