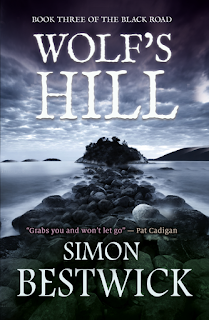 My seventh novel, published in 2018, and the sequel to Hell's Ditch and Devil's Highway.

Book Three of the The Black Road.

Helen Damnation’s rebellion against the Reapers has spread. All across post-nuclear Britain, the fires of revolution are beginning to burn. But her old enemy Tereus Winterborn still intends to rule supreme, and has a new ally in Dr Mordake, the creator of Project Tindalos – now monstrously transfigured by the forces he unleashed at Hobsdyke.


Their target is Helen’s closest ally: the last Grendelwolf, Gevaudan Shoal. The worst tortures of all await him in the cells of the Pyramid. At Hobsdyke, in the tunnels beneath Graspen Hill, the legacy of the Night Wolves is waiting for him – along with secrets about Helen that threaten to tear both Gevaudan and the resistance apart.
With the Reapers poised to strike at the first sign of weakness, a series of brutal killings breaks out behind rebel lines – and the evidence leads back to Gevaudan’s door. With all those closest to Helen turning against her, she faces her greatest challenge yet as Winterborn begins his bid for ultimate power.