The Lowdown with... Phil Sloman 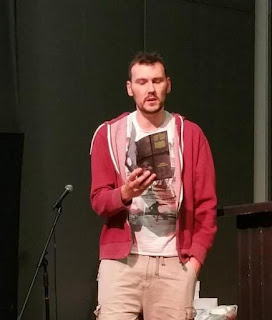 Phil Sloman is a writer of dark psychological fiction. He was shortlisted for a British Fantasy Society Best Newcomer award in 2017 for his novella Becoming David.

His short stories can be found throughout various anthologies and his collection Broken on the Inside has received widespread praise.

In the humdrum of everyday life, Phil lives with an understanding wife and a trio of vagrant cats who tolerate their human slaves. There are no bodies buried beneath the patio as far as he is aware.

1. Tell us three things about yourself
Firstly, thanks for having me over Simon. A pleasure to natter.

I’m absolutely fascinated by nature and will happily spend an afternoon wandering the local countryside mushroom hunting, birdwatching, looking for creepy-crawlies and small mammals hidden in the undergrowth or beneath logs and rocks. The danger is that I am an amateur at the mushroom hunting and had an uncomfortable 24 hours where I was worried I’d contaminated our kitchen with the spores from a death cap (nasty mushroom if you eat it which will almost certainly lead to an agonising and unpleasant death) but got lucky as it was only a false one.

I really love sport but my body is getting to the point where it doesn’t love sport quite so much. There’s doesn’t seem to be a month go by where I don’t pick up another ache or sprain yet still I persist in embracing this foolish rush and thrill I get from chasing or hitting a ball around. My enthusiasm makes up for a lack of skill in certain areas which means I’ve garnered a trophy or two to display at home.

And, seeing as I’m here, probably worth mentioning that I write too. Like most of our friends, I’ve always loved reading and have stacks of books at home with far too many remaining unread even as I go out and buy more (I admit it, I have a book buying problem!). A while back I was doing a book podcast with my mate Dion and I decided to give writing a proper go on discovering the indie scene (writing was something I had dabbled with for years but not taken seriously). So now I write dark psychological tales mainly as a way of me exploring the world out there which frequently fails to make sense to me.

2. What was the first thing you had published?
My first piece was in an anthology called Potatoes from Theresa Derwin’s Knightwatch Press; a story The Banshee’s Egg. The idea of the anthology was that writers could contrive a story around any theme so Theresa pitched this concept of potato related horror. Sounds ridiculous, perhaps, but there’s some great stories in there and I was fortunate to be chosen as the opening story.

The Banshee’s Egg is set in the wilds of Scotland in a small rural community and focuses on Marnie, a local healer, who is conned by a couple when she heals their child. They pay her with a potato purported to be a mythical Banshee’s egg and things go badly from there as Marnie because gradually more possessive of her treasure.

The feedback I received for Banshee spurred me on to write more at a time when I was considering just packing in before I had really started so it always has a special place in my heart.
called 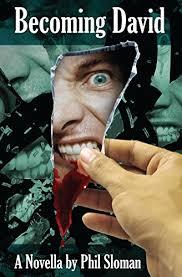 3. Which piece of writing are you proudest of?
Becoming David published by Hersham Horror Books. This was my first novella and having it nominated for a British Fantasy Society Best Newcomer award in 2017 is one of the highlights of my writing career to date and something I am immensely proud of. It was also great to do a launch event alongside some of my best mates: Peter Mark May (hosting), Mark West, James Everington, Stephen Bacon and Marie O’Regan.

With Becoming David, I wanted to do something different with the serial killer genre, to question our moral compasses and flip the story so a bad guy goes good or attempts to. Becoming David flips character perspective a lot with an uncertainty of who is David and who is serial killer Richard Lodge. Nailing those shifts and also getting the reader to give a crap about the vile excuse for human being that is Richard were the two pieces which I was most pleased with.

4. …and which makes you cringe?
Can I make a list? There is a load of writing sitting on my laptop which will never see the light of day, or not in its current format. It’s those exploratory pieces of writing we all have in our closet which seem good at the time but get rightly rejected for a reason. But I’m glad I wrote all those pieces because the collective of them forms the bedrock for my writing today.

5. What’s a normal writing day like?
I would love a normal day! Like a lot of writers out there in the horror community, I have a day job which occupies my 9 to 5 plus I have a wonderful wife and children who occupy the 5 to 9. So writing becomes snatched moments, often half an hour here, an hour there, as and when I can. It can be a week or so between writing so that completely breaks the mantra of ‘write every day’. Yet I seem to be able to chip away at stories and get a reasonable amount of wordage out there.

One thing I do is make sure I have my laptop most places I go to allow me to get the words down. For instance, I’m currently sat in the passenger seat of our car typing this up as we travel back down from visiting relatives. Train journeys to conventions are great for getting some proper writing time!

6. Which piece of writing should someone who’s never read you before pick up first?
My micro-collection Broken on the Inside from Black Shuck Books is probably the best place to start. And just to say it’s a pleasure to be alongside your good self and other great authors in what forms the Black Shuck Shadows series curated by Steve Shaw.

Broken on the Inside contains five short stories from me covering the past five or six years plus a new piece written for the collection. There’s been some great feedback for this and Broken made two reviewers’ top ten lists last year (Ginger Nuts of Horror and Kendall Reviews).

The stories in the collection all deal with mental disintegration in one form or another, that dark psychological style which makes you question what is real and what isn’t. There’s also a thin layer of dark humour spread across the tales, a wry look at life and the way we interact with each other. It took me a while to realise that this is what I write, that I wasn’t interested in the monsters and the demons or not the physical ones at any rate. I work hard to bring out the intricacies in our personalities and hopefully the stories resonate with the readers out there to some degree or other.

7. What are you working on now?
I’ve just finished a piece for Ginger Nuts of Horror for their LGBT+ month which may or may not be live by the time this interview goes out. [ED - It is, and you can read it here!] It’s the story of Simon and Jeff and the things we hide from each other. Author James Bennett challenged me to write the story, wanting to see what I would come up with. My mother is a lesbian so writing something as part of a wider LGBT+ celebration was important to me and I hope I’ve done James’ challenge justice.

Ongoing, I’m about to start work on two short stories. One is for a project I am currently sworn to secrecy on but I can say that I am gobsmacked about the amazing talent of the other writers involved with the project and know I need to bring my A game for this one! The second story is for the sixth instalment of Peter Mark May’s PentAnth from Hersham Horror. Peter asked me to be editor for this one too so I have double duties! Delighted with the authors I have on board for this who will all be giving their take on the theme of The Woods.

Beyond that, I have a novella I have to tidy up before sending round to publishers to see what interest there is out there and then the next step after that is to begin the process of writing a novel which will be a learning curve for me. I’m also in a good position of having a couple of short stories I wrote a while back which should see the light of day this year so will be great to see people’s reaction to those.

Otherwise I’ll undoubtedly be at a convention of two somewhere round the bar area so hopefully we can get time for a proper chat then over a beer or three.