Books I Love: The Therapy of Avram Blok by Simon Louvish

A couple of months ago, I was asked in a radio interview to name the three books I would save from the apocalypse for ‘the library at the end of days.’ The first two picks would be familiar to any readers of horror or science fiction: Ray Bradbury’s The October Country and Joel Lane’s Where Furnaces Burn. The third, The Therapy of Avram Blok, is one of my favourite books, although it’s very different from anything I’ve ever written or probably could write.

When They arrested Avram Blok for peeping on 27th November 1967, the judge of the Jerusalem District Court, Justice Henrietta Ben-Horin, sent him to the Moses Klander Institute for twenty-eight days of observation…

I first picked this book up in Woolworths, of all places, where you could buy lots of remaindered books for 99p. This was back in the 1980s, when I had three quid a week pocket money, so in those days you took what you could get. I like to think I’ve been pretty good at turning straitened financial circumstances to advantage – lord knows, I’ve had plenty of practice over the years – and one example of that is how I ended up reading a lot of odd and off-the-wall stuff. 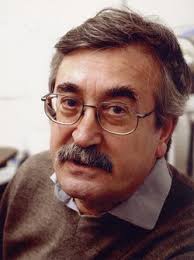 Therapy is the first of several novels Simon Louvish wrote about the character of Avram Blok. Louvish is a cineaste and former London Film School tutor, better known for his biographies of comedians such as W.C. Fields and Laurel and Hardy. In between all that, he has produced a wholly idiosyncratic body of fiction: irreverent, funny, clever, dark, surreal, interweaving slapstick comedy with myth, legend, conspiracy theory, politics, metaphor, SF and pulp fiction, and nowhere, perhaps, are his skills more wonderfully showcased than in The Therapy of Avram Blok.

Blok is the child of Rosa and Baruch, two Hungarian Jews, born on a refugee ship bound for what was then Palestine under the British Mandate. Growing up in the newly-created State of Israel, he’s a likeable, funny and recognisable figure: in a world where everyone is clamouring for him to fill this or that niche, fulfil this or that expectation, he is ‘troublemaker, dissenter and non-hero of our time.’

Listen, Vicky, he wished to say, I have had my quota of wars. The bodies, rotting in sand. Their reek, like a burst gas balloon. Velly solly, lady, no cannon fodder I, for idealist pie in the sky. No Blokkian precedent for commitment. On the contrary – remember Baruch Blok, keeping his head down through the firestorm? Surviving to breathe the air of another day another era, for which countless millions had died… and what was its face, this new dawn? What phoenix of the human spirit? More like a chicken, starved and wretched, yearning for the chopping block…

Fleeing his homeland for the fleshpots of Europe and America, he falls in (unrequited) love, tries to get laid (and occasionally succeeds), experiments with drugs, hobnobs with Black Panthers and radicals, accidentally gets caught up in the 1968 Paris evenements and is hunted by the French police, and sundry other adventures before returning to Jerusalem.

Having seen his share of service in the Six Day War, he is busted when he looks in through the window of his high school crush and instead spies the new occupants, an Orthodox couple, on the job. 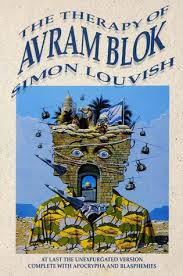 He meant, it was not quite a sight for sore eyes: Mr Friedman, his sweaty black beard and the Mrs, with a face like a bunch of garlic cloves, patchy hair and a glass eye. Though they went at it hammer and tongs… still, it was not a vision conducive to erotic emotion by any stretch of the imagination… Another second and he would have run, Blok swore blind, putting as great a distance as possible between himself and this dire apparition but, before he could so much as turn, the heavy hand of Patrolman Abutbul, uniformed minion of the Law of Jerusalem City, descended on his shoulder…

And, as a result, he finds himself committed for observation to the Klander Institute, an asylum in the hills above Jerusalem which proves to be the nearest thing to an oasis of calm and sanity that Blok can find.

And all this is barely scratching the surface.

The book isn’t told in anything approaching a linear fashion, leaping about in time with gay abandon, both in Blok’s past and those of the many colourful supporting characters: Nietszche, the Klander Institute’s ‘eminent inhabitant’, who claims to be the reincarnation of the deceased philosopher; Blok’s father Baruch, a wonderfully irascible abstainer from involvement in anything he can avoid, much like his son; his devoutly religious mother Rosa; the Black Panther Wellington Frog; the roguish jeep-driver Sa’id and his alter-ego Yehoshuah; the obsessive Police Inspector Tarablus; Blok’s sometime lover, Nurse Nili-Honey; the kleptomaniac Magpie; Davidov, the Klander Institute’s manic and exuberant ‘fixer’; the fanatical nationalist Colonel Zetz; the mournful commando Eisav; spy and pornographer Liam O’Habash  – and many, many, many, many more.

And we haven’t even touched on the tale of the Judas Pig, a bizarre porcine apparition believed to be the demonic spirit of Judas Iscariot. Or the decades-old hunt for the murderer of Moses Klander, the Institute’s Founder. Or the savagely funny passages set during Blok’s experience in the Six Day War. Or the story of The Man Who Counted The Spectacles And Gold Teeth At Auschwitz. And did I mention the time travel?

Blok, hitting upon a desperate plan to a put a mark on history… the two of them arriving at Braunau-am-Inn, July 1888, with a clutch of noise-making devices: a klaxon motor horn, a Purim rattle and a plastic Independence Day hammer. Hiding as night fell by the window of Alois and Klara Hitler, Schillerstrasse 23. Intent, by use of implements thereof, to interrupt the attempts of the good burgher and his spouse to conceive their baby boy, Adolf. Rattling on the windowpane at the first signs of nookie, raising Cain to cause instant shrivel… 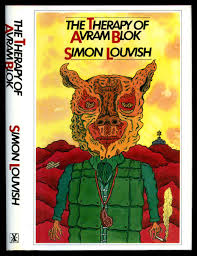 Throw into all of this a plot and host of sub-plots containing Soviet spies, talking cockroaches, a network of underground tunnels, a delightfully chaotic wedding, several musical numbers (I shit thee not), The Great Anti-Wagner Demo Of ’68, and the Elders of Zion (not the evil manipulators of anti-Semitic myth, but a coven of Jewish mystics tasked with predicting the coming of the Messiah), and you might have an idea of what a bizarre ride you’re in for.

The Therapy Of Avram Blok is so full of story, ideas and characters it’s practically coming apart at the seams, and its free-wheeling language and structure is all part of the ride; the form shifts into script, song, poetry, into wild ranting monologues, and it’s dizzying and wonderful. It’s almost impossible to convey the experience of reading this novel, and I mean that in a wholly good way. Perhaps that’s why Louvish’s novels aren’t better known, as they deserve to be: it’s very difficult, in any review or précis, to fully communicate what a tremendously pleasurable reading experience they are.