The Lowdown With... Laura Mauro 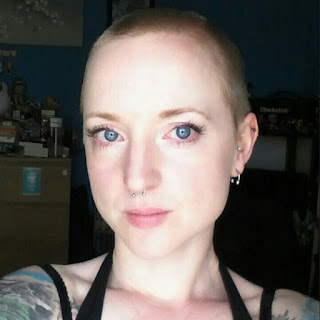 Laura Mauro tells it better than I could: 'Most writers will tell you they’ve been writing since they were small, and I’m no exception. I started out writing poems, which graduated into awful teenage angst poems, which eventually grew into aborted attempts at writing a novel.

I started writing short stories in 2011 but never took it seriously until joining Absolute Write, where I was contacted by a member of the T-Party. Since then, I’ve been what you might call a ‘serious’ writer, although I’m yet to give up my day job.
I’ve had stories published in Shadows And Tall Trees, and in Black Static. My short story “Red Rabbit” made Ellen Datlow’s longlist for Best Horror Of The Year 2014, and “When Charlie Sleeps” was reprinted as part of the “Best British Horror 2014″ anthology, edited by Johnny Mains. In September 2014 my short story “Ptichka” was published as part of “Horror Uncut: Tales Of Social Insecurity and Economic Unease”, out now from Gray Friar Press. In 2015, my short story “The Grey Men” appeared in Black Static.
As of May 2015, I’m in the early stages of writing a novel.
I live in Essex, under extreme duress, and when I’m not making things up I enjoy reading, travelling, anime, video games, collecting tattoos, dyeing my hair strange colours and making up nicknames for my cats.'
1. Tell us three things about yourself.
- I work as a laboratory technician, currently in antenatal screening, which is not nearly as exciting as it sounds. Mostly it involves putting stickers on things, then putting them into a machine and pressing a button. I enjoy it, though. I also work as a healthcare assistant in an outpatient clinic some evenings, mostly in gynaecology. Sometimes, I wish I'd studied medicine at university.
- I have nerdy tattoos. I’ve got seven, two of which are Final Fantasy related. I also have a three-quarter sleeve in progress based on my favourite film – Hayao Miyazaki’s ‘Spirited Away’. I know tattoos aren’t for everyone and people probably think I’m a bit mental for covering myself in pictures but it makes me happy.
- As a kid, I apparently saw a ghost at my nan’s house. I don’t remember this, but my parents tell me that I’d come downstairs and tell them that there was a lady at the end of the bed, and could they please ask her to stop talking to me as I was trying to sleep. A little later on, I told them her name was Betsy. I wasn’t scared to begin with, but as time went on I became more and more frightened of Betsy, and eventually my grandparents had my brother and I sleep in a different room. I stopped seeing her after that, but other people saw weird things in that house – someone walking upstairs when there was nobody else in the house, that kind of thing. Sometimes, I think about checking the census to see if anyone named Betsy ever lived in that house.
2. What was the first thing you had published?
I wrote a poem about my cat aged 7 and it got into an anthology. That's what the publishers said, but we've never been able to find a copy with the poem in, so I don't know if I can claim the credit!

3. Which piece of writing are you proudest of?
Probably "When Charlie Sleeps", which was in 'Black Static' (and ended up in 'Best British Horror 2014'). It was the first time I'd really let myself off the leash in terms of embracing weirdness. I had this line in my head from a Skunk Anansie song ('Charlie Big Potato') and I found myself turning it over in my head, trying to unravel the story of it, and everything I came up with came back to this sad, childlike monster. I told myself that it was too weird, and that nobody would want to read about an ugly monster in a bathtub, but I wrote it anyway because I wanted to write about it. And as it turns out, people seemed to like it.
4. …and which makes you cringe? 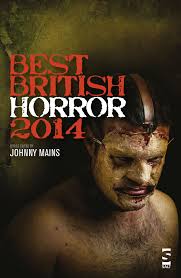 I started writing a cyberpunk novel a few years ago until it became horribly apparent that I have no idea how technology works and that I should probably leave it to the people that do. I sometimes wish I could virtually burn that novel.
5. What’s a normal writing day like?
I work full-time and have a part-time job on top of that, so I tend to write whenever I have a spare hour. Usually my lunch break, or after work if I'm not at my other job. The routine starts with a cup of tea - always tea, no other beverage will do. Then it's a matter of forcing myself not to fanny about on Facebook and focus on writing. That's the hardest bit for me - actually getting down to it and not being distracted by cat videos, or arguing with people who are wrong on the internet.
6. Which piece of writing should someone who’s never read you before pick up first?
Anything they like! But I would probably suggest "Ptichka", in 'Horror Uncut'. 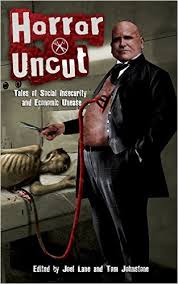 7. What are you working on now?
I'm trying to gather the courage to start work on a novel. It's set during the 1960's in south London, and it's about a woman who finds herself caught up in the underworld of gangsters and villains, and the underworld beyond that - a world of ghosts who tell dangerous secrets she really shouldn't know. I sort of fell into a research hole with this one. I was too afraid to start it because I didn't think I knew enough about the 60's to make it feel authentic. But the advice I got was to just go ahead and write, and fix the time-period details on the redraft, so I'm staring into the abyss and ready to take the plunge!
Posted by Simon at Friday, August 28, 2015