Yes, today is the day: Snowbooks have released GAME OVER, the new anthology from Jon Green! 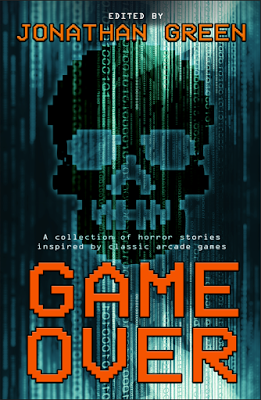 In the cavern-like darkness of the arcade, the neon phosphor-glow of the screen beckons you close. Drawn to the dancing pixels like a moth to a flame, digging deep in your pocket you pull out a shiny coin and thumb it into the slot as the electronic siren sings the fanfare that marks your arrival. One hand on the joystick, the other splayed across the control buttons, your pulse begins to quicken.
READY PLAYER ONE
PRESS START
You’ve barely begun but suddenly the discordant bleeps are trumpeting your failure as your 8-bit adventure comes to an abrupt end. At least in the world of the video arcade you get a second chance. But what is the true price you pay when you make a pact with the digital demon? There’s always another coin, an extra life to be earned, a second chance… Isn’t there?
GAME OVER
A dozen stories of creeping dread and savage horror inspired by the humble amusement arcade and the classic coin-ops of yesteryear.

Twelve tales to chill your blood by twelve masters of the malevolent and the macabre.
Just keep reminding yourself, it’s only a game… Isn’t it?

GAME OVER includes my story 'The Face Of The Deep', which goes a little like this...


A hundred little croaks of fear answer me. But when I move, they follow. Abraham, another giant among frogs, brings up the rear. “Go on,” he says. His voice is deep and soothing. “Follow Moses.” They listen to him, and shuffle after me.


I stop again when the ground drops away. Through the grass I see the embankment, the crash barrier at the bottom: beyond that, three lanes of traffic, a central reservation, three lanes more and then the river.


Six lanes of blacktop and a river full of teeth.


This is our only chance to live.


This is the killing ground.


You can get the ebook for a paltry £1.19 for the time being! (Not sure at the time of writing how long that offer's for, so you might want to take advantage NOW!) Or you can buy the paperback direct from Snowbooks and get money off by entering the GO-PRINT discount code.

You can also read interviews with some of the contributors here.