The Lowdown with... James Wallis

The subject of today's GAME OVER edition of The Lowdown is James Wallis. James is a games designer and consultant, best known for the storytelling games Once Upon a Time and The Extraordinary Adventures of Baron Munchausen. His previous fiction includes novels for Virgin Publishing and the Black Library. At present he is lead designer on the reboot of the classic RPG Paranoia, runs the games consultancy Spaaace, and lectures in game design and interactive narrative at London South Bank University. He lives in London with his wife and 1d4 -1 children. He tweets here. 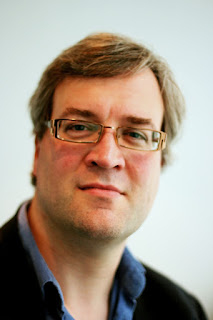 I'm very tall, I have a voice somewhere between Stephen Fry and Jeremy Clarkson, and I ought to be writing my talk for Nine Worlds.
2.       What was the first thing you had published?


I cheated, I started off doing fanzines when I was still at school in the early 1980s. A couple of years later I twigged that magazines would pay me to write the sort of stuff that I was paying to print (fanzines do not run at a profit) and my first article appeared in Warlock magazine in 1984. Since then I've written for everything from the Fortean Times to the Sunday Times. My first fiction sale was to the anthology Villains, edited by Neil Gaiman and Mary Gentle, in 1992.
3.       Which piece of writing are you proudest of?


Like a lot of writers I hate all my own work on principle, though I do have a sneaking fondness for bits of my game The Extraordinary Adventures of Baron Munchausen. But that was written by Baron Munchausen so it doesn't count.
4.       …and which makes you cringe?


I am on a life-long mission to track down and destroy every copy of my first fanzine. 'Juvenile ephemera' doesn't begin to describe it.
5.       What’s a normal writing day like?


I spend the first hour of the day in a coffee-shop round the corner from my office working on a personal project, then head to the office and spend the rest of the day working on whatever's paying the bills--I share space with Pelgrane Press, noted publishers of RPGs and story-games, in Clapham. I'm lucky enough that a lot of my work involves creative writing in one form or another, from game-scripts to RPG rules, and occasionally fiction. 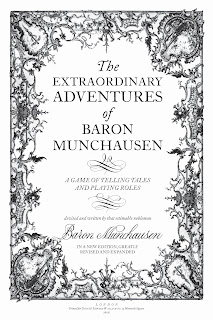 6.       Which piece of writing should someone who’s never read you before pick up first?


The Extraordinary Adventures of Baron Munchausen is the one I get the highest royalty on, so obviously that. It's the first RPG to replace dice and character sheets with money and fine wines, and mostly consists of Baron Munchausen drinking, rambling, and failing to explain the rules.
7.       What are you working on now?


I'm lead designer on the new edition of the classic tabletop RPG Paranoia, which is taking most of my time, and I'm about to embark on the novel of Alas Vegas, a game I kickstarted a couple of years ago, which is basically Ocean's Eleven directed by David Lynch from a script by Dante. I might actually be pleased with that once it's done.