Angels Of The Silences To Return! 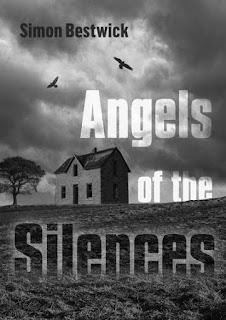 Delighted to announce that my novella Angels Of The Silences is to be published in the US by Omnium Gatherum!

Cover art for Omnium's edition is still to be arranged; the image here is Neil Williams' artwork for the original 2011 Pendragon Press edition (long since sold out.)

Angels will be released in 2016. Further details to follow.

Two teenage girls have the kind of friendship we only often experience once in our lives. More sisters than blood sisters, spiky, argumentative but loyal and close, two sides of the same coin. That sort of friendship can’t be broken easily, even by death. And a terrible death at that. Yet, somehow, they are still “alive”, fleshed, clothed, and human in all but heartbeat.

There is a way to move on, but neither are inclined to do so, because, perhaps, there is a reason they’re still here on earth in the land of the breathing, where they go about their daily lives with their status unsuspected by friends and family alike. There is, they suspect, unfinished business.

But when the time comes, when is it right to move on and leave everyone and everything they love behind them?

Angels of the Silences is short, sharp and for me, immensely touching. The two girls are complete, three-dimensional, recognisable. Their plight is utterly realistic, yes, realistic, because there are dilemmas here; who to tell, how to deal with parents and other loved ones, with the possibility that the truth will out and that there will be questions, torment, terrible grief.

A compelling, intelligent and affecting story... Angels of the Silences is one of those brief but startling works that we stumble upon every now and then. Read it and I dare you not to be moved. - Terry Grimwood.