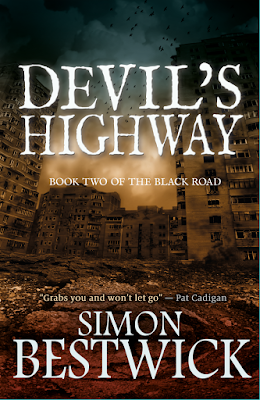 This week has been exciting and frustrating in equal measures. On the one hand, my crime novel has gone out to publishers; editors at three or four major imprints now have it on their desks. So now I just have to cross my fingers, wait and hope.

On the other hand, work on Devil's Highway hasn't been going as quickly or smoothly as I'd have liked; I'm in the process of typing up the first draft from pre-recorded notes, and I'm behind where I'd hoped to be. Well, that's often the way, but tendonitis and a lousy cold aven't helped; I've been feeling wiped out for most of the week. Not been out of the house very much either, which has been little help; I went for a walk yesterday, but came home exhausted and flopped out for the rest of the afternoon.

So I'm trying to take it easy today in the hope that'll help. Will see how that goes. I want to get the novel into a good enough shape to send a draft out to betas at the beginning of May.

The harder you pull, the tighter the knot gets. I've spent a lot of the last week or two typing stuff up, breaking away from it to work-avoid by dicking around on Facebook, then berating myself for not doing enough before spending more time glaring at the screen and demanding I do more work today, not going out of the house or doing anything else... it becomes a vicious circle, so I may have a week or two away from Devil's Highway to work on other projects, then try and go back to it (hopefully) refreshed. I have an idea or two revolving around abandoned communities - not this one or that one, though!

The Spectral saga resurfaced on Facebook, with much of the same unpleasantness as before. In the interests of fairness and full disclosure, though, I have now received the outstanding monies due to me from Black Mountain. Many thanks to Gary Compton for sorting that out. So, with the exception of any royalties that The Second Spectral Book Of Horror may accrue, that's hopefully the end of my involvement with the whole sorry affair. Other customers and authors are still in the process of recovering what they're owed, but the wrongs appear to be getting righted, steadily.

The lovely Priya Sharma has been doing a feature on her blog, interviewing contributors to the Black Shuck Books anthology The Hyde Hotel. So far, the victims have included James Everington, Alison Littlewood, Mark West - and, in today's instalment, the one and only Cate. There'll be one from me coming up soon.

On a happier note, here's something I've been meaning to link to for a while; the artwork of Sergey Kolesov, aka Peleng. Bizarre, grotesque, funny and macabre stuff.
Posted by Simon at Friday, April 08, 2016

Sounds like the 'dozy' virus I've had! Hope you're better soon and up to writing at full strength.