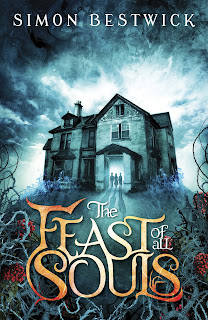 As you know, I've another novel due for release this year, this time from Solaris: The Feast Of All Souls (formerly known as Redman's Hill.)

As you can see, it also boasts an awesome cover by Ben Baldwin.

378 Collarmill Road looks like an ordinary semi-detached house. But sometimes, the world outside the windows isn’t the one you expect to see. And sometimes you’ll turn around and find you’re not alone. John Revell, an old flame of Alice’s, reluctantly comes to her aid. The hill is a place of legends – of Old Harry, the Beast of Crawbeck, of the Virgin of the Height and of the mysterious Red Man – and home to the secrets of the shadowy Arodias Thorne.
Alice’s house stands at a gateway between worlds. On the other side of it, something has woken. And she and John, alone, stand in its way...