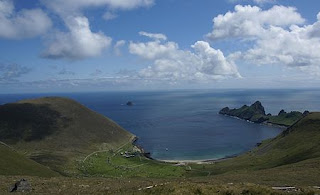 Lost and abandoned communities fascinate me, and Britain's littered with them. Mediaeval villages depopulated by plague, destroyed by war or the whim of a feudal lord, mining communities deserted as the seams of lead or gold ran out, coastal settlements lost to the sea, islands finally abandoned when life there became too hard...

I just saw this news article: a woman called Rachel Johnson, nee Gillies, passed away today at the age of 92. Her death marks the end of an era.

The archipelago of St Kilda is one of the most remote of all the British Isles; nearly fifty miles west of Harris and Lewis, it's the most westerly of the Outer Hebrides. It was inhabited for nearly two thousand years, until the last of its inhabitants were evacuated on 29th August 1930.

Life there was hard and isolated, but the islands - now a nature reserve - remain some of the most 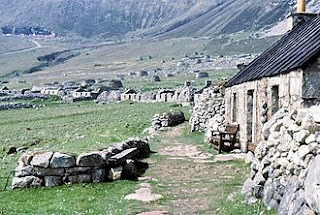 beautiful in the UK. They're also home to unique animal species like the Soay sheep, the St Kilda wren and the St Kilda fieldmouse. (There was also a St Kilda house mouse, which became extinct following the desertion of the islands.)

Rachel Gillies was eight years old when she was evacuated. With her death, the last of the native St Kildans has passed away.

The story of the islands is a rich and fascinating one, and you can learn more about them here. Here's a 1972 documentary about them to whet your appetite.

In the words of one former inhabitant, 'it was a far better place.'


Get your own valid XHTML YouTube embed code
Posted by Simon at Thursday, April 07, 2016