The Lowdown with... Willie Meikle 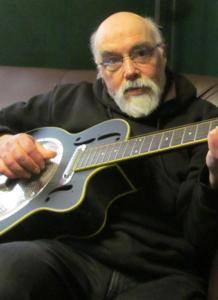 William Meikle is a Scottish writer, now living in Canada, with over twenty novels published in the genre press and over 300 short story credits in thirteen countries. He has books available from a variety of publishers including Dark Regions Press, DarkFuse and Dark Renaissance, and his work has appeared in a number of professional anthologies and magazines. He lives in Newfoundland with whales, bald eagles and icebergs for company. When he's not writing he drinks beer, plays guitar, and dreams of fortune and glory.

1. Tell us three things about yourself.
I'm Scottish, I live in a house on the shore in rural Newfoundland in Canada, and I wish I was a spaceman.

2. What was the first thing you had published?
It was back in late 1992, my story AN EARLY FROST appeared in a UK small press magazine, XENOS. A lot of us back then had stories in it - it was one of the more regular publications and ran to an impressive number of issues. I ended up placing half a dozen stories there before it went the way of so many others. The story itself was a dark fantasy, featuring an abused kid, a winter night, and a wee frosty pal who shows him the ways of cold magic. Like many of my early stories, it was based heavily on childhood dreams and nightmares. I've still got a warm place in my heart for it, and it's since appeared in several other magazines. The first thing I wrote, a wee ghost story, DANCERS, wasn't published till later (in ALL HALLOWS) but it did win 2nd prize in the WRITER'S NEWS annual competition in '92, so I was off and shuffling about a bit. 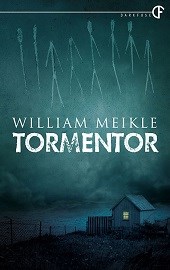 3. Which piece of writing are you proudest of?
I think I nailed what I wanted to say most strongly in my novella TORMENTOR from DarkFuse. I've had a love affair with the Isle of Skye for many years, had an idea in my head for a long time about a revenant spirit of rhythm that was tied to the history of a place, and I wanted to say some things about loss and creativity. The idea of getting those ideas together was percolating for years until I felt confident enough in my writing to do it justice, then, back in 2014, it all came in a rush. I think I got away with it.

4. …and which makes you cringe?
Some of my early stuff was little more than exercises in leading up to very bad puns. I really wish I could take several of them back. The worst offender is a very short story called "At the Trial of the Loathesome Slime" which is a melange of Laurel and Hardy references, a big blobby thing that gets killed by putting it through a micropore sieve, and a last line 'That's another fine mesh you've gotten us into.' See what I mean?

5. What’s a normal writing day like?
I generally start about noon, having spent the morning getting the chores / shopping / admin / pissing about on Facebook etc squared away. I sit at my laptop and write in bursts of about 300 words at a time punctuated with more visits over to Facebook and email and trips downstairs for coffee and biscuits. That goes on through the afternoon until teatime. After food I'm generally back at it for a couple more hours. I average, what with editing, deleting and rewriting, around 1300-1500 words a day. The day usually ends with us watching a movie or some old scifi series. I used to have regular breaks for guitar playing but that's been curtailed quite a bit in recent years by the onset of a touch of arthritis in wrists and fingers. Luckily it's not stopped me typing - yet. 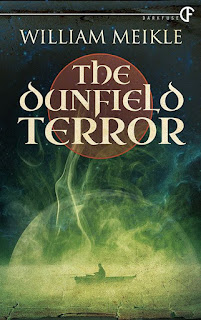 6. Which piece of writing should someone who’s never read you before pick up first?
I'd suggest my most recent novel THEDUNFIELD TERROR (DarkFuse again). Newfoundland has been slowly taking a hold in my writing since we got here, and TDT is a synthesis of this place with all my old influences. There's Wyndham, Quatermass, Lovecraft and possibly even some Doctor Who in this novel of a strange thing crawling through a major winter storm in a rural fishing village in Eastern Canada. It's another story where I think I nailed almost exactly what I wanted to say, but more than that, I had an awful lot of fun with it, and I think it shows.

7. What are you working on now?
I'm in the early stages of a new novella which is shaping up to be another synthesis of Newfoundland and old influences. This time it's my distant past training as a biologist, and an investigation of strange Cetacean deaths leading to the uncovering of a centuries old whale worshipping sect in a remote community. I'll be having to avoid too much of the Wicker Man creeping in, but it has started well and I'm keen to see where it ends up.
Posted by Simon at Monday, April 04, 2016