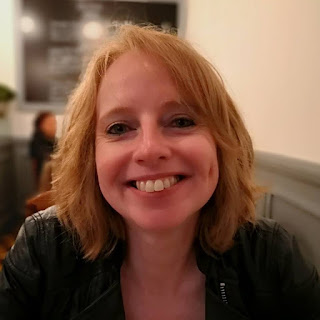 Joely Black is an author and academic specialising in magic and ritual practices in the Ancient World.
She has a PhD in Geography and is now studying for a second in Classics and Ancient History. She lives in Manchester with her partner and cat, and enjoys running, travelling, and learning dead languages. Her work is available on Amazon Kindle under the titles Amnar and Five Empires.

Since nobody knows who I am, I should start at the beginning. Way back in the mists of time, I wrote a fantasy series called Amnar. About five years ago, I started working on what turned out to be a prequel. I’ve been working on the first book of that for a while. The elevator pitch introduction is that an orphaned girl is thrown into a machine that turns her into a god. She has had her memory stolen and was intended to be a weapon of war. She decides to take revenge on the people who did this to her, and build a new, better world. She has a twin sister, which adds to the complication: her sister is horrified by what she can do so she has to wrestle with whether she should use her new abilities at all.

About five years ago, I was involved in a Dungeons and Dragons game with friends, and developed a character I really liked. She was an assassin with some really unique abilities, so I decided to make a world where I could write stories about her. Somehow, the world got tacked on to the world I usually write in as a civilisation that existed before Amnar. Some of its characters are involved in establishing what becomes Amnar later.


3) Tell us about the process of how you created it.

The whole process of one civilisation collapsing and another rising up from the ashes really interested me – since I’m a Classicist, this is my bread and butter – so the books have been spawned from a combination of me working on a PhD in Classics and playing Dungeons and Dragons a lot. I’ve been working on aspects of religious practice in Greco-Roman Egypt, which inspired a lot of the background to the world.


4) What was your favourite part of the process?

All of it. I’m in the middle of writing now, and that is fairly tough. I am juggling PhD writing, learning ancient languages, and occasionally teaching as well as writing, but that’s really the bit I enjoy the most. I do miss playing Dungeons and Dragons, though, as I haven’t had the chance in a really long time!


5) What was the toughest part of it?

Finding the time and the energy. I suffer from severe depression and anxiety, and there are so many things you have to do as a PhD student, plus language learning, a lot of the work is finding time. You have to learn to streamline, so you have to decide what’s most important and miss out on the rest.


6) Is there a theme running through it?

This is very much about the dangers of humans having a lot of power and not knowing how to handle it.


7) If you had to sum this book up in three words, what would they be?