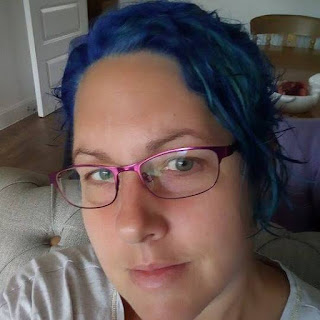 Penny Jones currently lives in Leicestershire with her long suffering husband and patron of the arts Simon (although they do spend any free moments they have plotting to leave the landlocked county and get closer to the sea).

Penny knew she was a writer when she started to talk about herself in the third person – Her family apparently knew when she was little and Santa bought her a typewriter for Christmas (honestly who buys a three year old a typewriter?)

Penny loves reading and will read pretty much anything you put in front of her, but her favourite authors are Stephen King, Shirley Jackson and John Wyndham. Her whole family are avid readers, meaning that they have had to move three times just to fit in their book collections. In fact Penny only got into writing to buy books, when she realised that there wasn’t that much money in writing she stayed for the cake.

As with all writers Penny has crippling impostor syndrome so if you would like to be her friend you can send her a request at Facebook.

Or you can follow her on Twitter, although she does still find it freaky that on-line stalking is now a thing.

2) How did it come about?
The anthology story was an invite, which is always nice. The editor had read one of my stories in another anthology, liked it, and asked me if I’d like to do a piece for Hersham Horror. The theme was around woods and forests, and I’d had an idea about growth rings rattling round in my head for ages, and that developed into my story “Dendrochronology”.

The collection came in an entirely different manner, I was approached by the publisher when I was at a writing convention last year, I may have had one drink too many and completely forgot about it. It was only months later when I was looking through some of the stories that I had written, and was trying to work out how I was going to sell several short stories around the theme of children (they really scare me), that I remember that Steve Shaw the owner of Black Shuck Books had asked me for a themed collection.

3) Tell us about the process of how you created it.
It always starts with an image for me. I tend to be quite a visual person, I prefer to see or read something, rather than have it verbally explained to me. I just find that I process information better that way. Once I have that image in my head I will study it, I’ll look at the minute details of why that image is in my mind, of what makes it interesting or disturbing, what emotions does it evoke in me. I’ll then almost pan out until I can see what is around the image, how does it affect its environment, how does its environment affect it? Then the image will start to move, like a film in my mind. What has happened to get to this point? What will happen next? By the point I actually sit down to write I’ll usually know most of the story, then it’s just a matter of finding out its secrets and getting the right words down on the page.

4) What was your favourite part of the process?
The initial idea is always my favourite part. I tend to find writing quite difficult and I never feel that the words on the page at the end do justice to the story in my mind. I’m looking forward to the day when I can just do a direct cranial transfer of the story.

5) What was the toughest part of it?
Commas. My punctuation is horrendous. 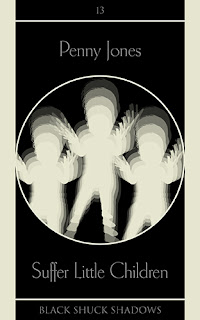 6) Is there a theme running through it?
I’m a psychiatric nurse by profession, and mental health does tend to be a theme throughout all my work. I’m very much of the opinion that mental health needs impact on everybody to some extent or another, and it is just the severity of it which differs. My collection also has a running theme with children being either the antagonist, victim or both. I’ve always found children creepy, I always say I don’t really like them very much, and that even as a child I didn’t. Also when I was little I had a phobia of injections which my dad tried to cure me of, by telling me about all the injections and blood tests you had to have when you became pregnant. It didn’t help at all with my phobia of needles, but it did install an even deeper fear of pregnancy. One of my major concerns is that if there was ever an apocalypse I would be forced to help repopulate the planet (it happens in every apocalyptic novel I’ve ever read). But the family planning nurses tell me that isn’t reason enough to get my tubes tied.

7) If you had to sum this book up in three words, what would they be?
Creepy, freaky, children.

8) Where can/will we be able to get hold of it?
“The Woods” will be available at EdgeLit, once released it will also be available from Hersham Horror Books.

“Suffer Little Children” is available for pre-order from Black Shuck Books.
Posted by Simon at Monday, May 20, 2019