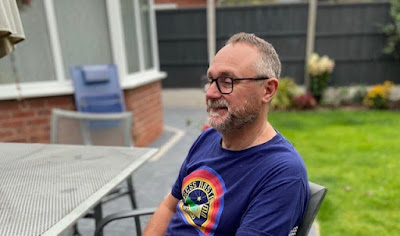 Jeffery is a member of the Society of Authors, British Fantasy Society (also as a regular book reviewer), and actively involved in the Horror Writers Association where he is a mentor on the HWA Mentorship Scheme. Jeffery is married with two children and lives in Worcestershire, UK.

Hi, Simon. First of all, I’d like to say thank you for being a generous host.

In terms of new projects, I have just released the second book in my A QUIET APOCALYPSE series through DEMAIN PUBLISHING. The series is set after a pandemic, where a mutant strain of meningitis (MNG-U) has left most survivors deafened and dependent on those few who have retained their hearing. The novella is called CATHEDRAL and features a cordoned off section of Birmingham city centre, where a fledgling society keeps order using spurious methods of social control.

Like the first book, the story is told from a single person point of view. Where the original novella featured a hearing survivor enslaved by a deafened farmer, CATHEDRAL focuses on a deafened woman living in a town that is terrified of returning to the chaos prevalent in the immediate aftermath of the collapse of civilisation. The town’s presiding council use a bastardised version of Maslow’s Hierarchy of Needs (known now as Maslow’s Law) where community comes before all, and there is no scope for individuality. Failure to adhere to Maslow’s Law means The Corral, a place where dissent is met with ritualised punishment.

A QUIET APOCALYPSE was meant to be a standalone volume. Critical and reader response was highly positive, but there was consistent interest in what was going on outside the experiences of our hearing protagonist. A few reviewers were captivated by the mention of CATHEDRAL, an almost mystical place that meant different things to different people. This had me thinking about CATHEDRAL as a construct of social control in a world never too far away from falling to ruin.

3) Tell us about the process of how you created it.

As a concept, CATHEDRAL was in my head as context for pending interviews. I decided that it would be of value to write these ideas down. This process made more sense once words were on the page. The story seemed such a natural progression, it made perfect sense to develop it into another novella. Looking at the isolating nature of deafness, I wanted to maintain the single person perspective and use it as a device to compound that sense of alienation for the reader. This works extremely well for the story, but I readily accept this kind of narrative does not appeal to all.

4) What was your favourite part of the process?

The story came so effortlessly, felt so right from the outset, that the whole process was as exciting as it was unusual. The basic story structure was there from the start, with a few tweaks in the second draft, to knit together any loose strands. Maslow’s Hierarchy of Needs was something that came to mind when I was considering the society in which our protagonist lives. I had worked with Maslow’s model during my time as a mental health professional (35 years in the NHS) and its core concepts worked so well until applied to a society as a whole. This is deliberate, of course, as the model is for the development of individuals to become the best they can be. If you remove individuality from the equation, in this instance by culling the top two tiers of Maslow’s triangle relating to personal growth and self-actualisation, you have an effective social model with no scope for individualism. Add to this fears of an existential threat, then I felt the scene was set for strong drama. Weaving this into the storyline was my favourite part of the project and reinforced that I was doing something different.

5) What was the toughest part of it?

There are some scenes in the book that are very brutal, but I wanted to make sure that they were not sensationalised or marred by inept delivery. This is an extremely horrific story but not a book of extreme horror, so maintaining a balance was important when putting those scenes together. In the end, I made the controversial aspects of these events almost an afterthought of the protagonist as they rationalised their involvement in what is ritualised retribution on Harbingers, that is those culturally Deaf people who are blamed (without evidence) for the end of humanity. This was then contrasted by the response to this practice by someone who has just arrived in Cathedral and witnessing the atrocities for the first time.

These scenes were difficult to write and difficult to get right, but they are so important to demonstrate how, by trying to keep away from chaos, we step ever closer to losing something far more terrifying. I think they work well, and reviews so far have not been contrary to this early conclusion. 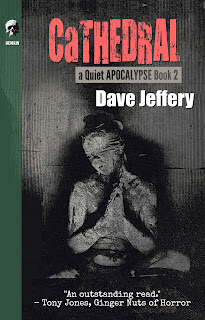 6) Is there a theme running through it?

The central theme is that of abject fear of isolation - that created by the disease and also of being alone in a world that has fundamentally changed – and how, as human beings, we maintain our sense of well-being. The idea that self-imposed adversity, shared through community, is better than the crippling terror of fending for oneself in a hostile environment is at the heart of the book. It asks the question: “Are some horrors easier to accept if they mean preventing something far worse?” Ultimately, I’ll leave that to the reader to decide.

7) If you had to sum this story up in three words, what would they be?

8) Where can/will we be able to get hold of it?

CATHEDRAL is out now in eBook format on Amazon by following this LINK.

The paperback is coming at the end of February/early March 2021.

Thanks again for allowing me to share these insights with your readers!