So, various things have been going on: I've been meaning to blog about them but life's kept getting in the way - or lack of energy and spoons has. Anxiety, depression and a monumentally buggered-up sleep-cycle have been the main culprits in that respect.

Notwithstanding, I've been keeping on keeping on as best I can. I'm plugging away at a new novel and have made notes for the next project. As my Facebook followers will know, I've been tinkering on and off with a cartoon strip of sorts, Llewellyn the Lamprey (which is all Lauro 'Tank Girl' Mauro's fault) and ended up doing a Llewellyn music video after watching too many Sharknado films. Despite the spoon shortage, I ended up using it as a calling card when some Facebook friends needed a music video of their own for a protest song about the appalling events in the USA (referring, for the avoidance of doubt, for the thuggish and nazi-like behaviour of US police officers and their vile, barely-human apology for a President) and knocked together something.

In other, more prosaic news, I've revived the blog's mini-interview feature, The Lowdown, but modified slightly: COVID-19 has changed a lot of things for a lot of people, including, for many writers, not only how they work but if they work at all. The new interview, The Lockdown, focuses not only as an introduction to the writers involved and how they're getting on but takes a look at how various writers (and, in future, editors and artists) are dealing with the situation. The series kicked off last week with interviews with Matthew M. Bartlett and Conrad Williams; this week we've picked the brains of Tim Major and Marion Pitman.

The re-release of my story collection And Cannot Come Again has been delayed by various issues, many COVID-related, but I am delighted to announce that both the hardback and the ebook are now available, featuring Ben Baldwin's sensation cover art and two new stories that did not appear in the original ChiZine edition. This paragraph may have taken longer to type than it should have because I kept stopping to drool over the pictures of the book. Ahem.

IMPORTANT: Please take note that any paperbacks of And Cannot Come Again currently for salenot the new edition from Horrific Tales. These do not contain the new stories 'In The Shelter' and 'Black Is The Morning, White Is The Wand', and the proceeds won't go to Horrific but to ChiZine from whom, for well-documented reasons, I would prefer readers not to buy the collection from.

on Amazon are the original ChiZine edition,

I've put two new stories up on Patreon: you can read 'The Garden', a story of finding peace in a time of war and chaos, there or on Ko-fi, and it's also available as an audio reading. The second story, 'In The Service Of The Queen', concerns a man who can put right some of the damage left behind by war, but at a terrible cost to himself. This story is paywalled, but you can become a subscriber and access it and a number of other exclusive works from as little as a dollar a month. 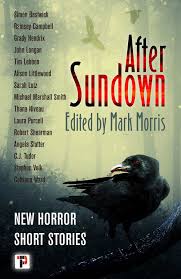 The 'how-to' of writing is always fascinating, for me anyway, especially since my last couple of books have been very much a case of 'Pantsing' rather than 'Planning'. While I'm not a massive Jack Reacher fan, I'm currently reading the 20th novel in Lee Child's mega-selling series, Make Me, as a prelude to checking out Andy Martin's book Reacher Said Nothing: Lee Child and the Making of Make Me. Child is, famously, about as big a Pantser as you can get, typically starting his books with nothing in mind beyond an opening scene and maybe a title: Martin proposed a unique experiment in which he would actually watch Child creating his new book as he went along, observing and taking notes.

,Most of us might find such a proposal - however fascinating as an idea - unbearable in practice: after all, writing is about as private an activity as you can get. I've written in public places like coffee shops on many occasions (although that feels like a distant dream right now!) but never with someone actually looking over my shoulder. That level of self-consciousness is more often than not the kiss of death. Nonetheless, Child accepted the idea enthusiastically, and Reacher Said Nothing is the result. Martin talks about the process in this article here, which fascinated me enough to want to read his book - and, before I did, Make Me itself.

Another piece on the process is this one from Michael Moorcock: How To Write A Novel In Three Days. This one's from the other end of the scale, that of a Planner - and is an intriguing look at the nuts and bolts of writing a novel.

I found both pieces fascinating. Take a look yourself if you're stuck for some weekend reading matter, and see if you agree!