The Lockdown with... Tiffani Angus 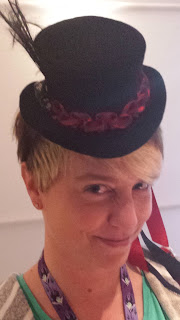 Tiffani Angus is a Senior Lecturer in Publishing and Creative Writing at Anglia Ruskin University in Cambridge and the General Director for the Anglia Centre for Science Fiction and Fantasy. She’s the author of the debut Threading the Labyrinth (Unsung Stories, 2020) and of several short stories in a variety of genres. She doesn’t currently have a garden, but that’s okay because she’s more a fan of going to gardens that other people have built. You can find more about her writing at her website and follow her on Twitter or Instagram.

1. Tell us three things about yourself.
This question always makes me wonder whether the mundane is too boring or the weird too ridiculous. Let’s see: the mundane is I was born in the American Southwest and do NOT miss the heat (I’m a human fern so British weather is just fine with me pleaseandthankyou); slightly edging toward weird is that decades ago one of my closest friends dubbed me Martha Anne—a combination of Martha Stewart and Anne Rice; and random is that Grady Hendrix called my writing style a ‘fucked up midwestern gothic sensibility’, which I try to live up to. Oh, and a bonus mundane: I love roller coasters but don’t like Ferris wheels.

2. Many writers have said the COVID-19 outbreak and the lockdown have made it harder for them to create. Have you found this? Has the outbreak affected you as a writer and if so, how?
The lockdown has made it harder to write because I am now home working, and I teach creative writing at uni, so there is no break from the office. Plus, teaching creative writing means spending many of my working hours helping my students figure out how to improve their writing—I have to be “on” when interacting with them—and that can be draining when it’s time for me to work on my own writing. My attention span has been shot and I find myself moving from thing to thing after a short bit of concentration, which doesn’t exactly help me with finishing the manuscript I’m working on now! But I know I’m not alone in this; a lot of my writer friends are finding they’re dealing with the same feelings.

The main way the lockdown negatively affected my writing is by undermining my debut. My novel, Threadingthe Labyrinth, was supposed to come out April 13, with launches at a convention and a bookstore, and a big party I was going to throw where I live, etc., and of course that was all cancelled. Then the publisher and I decided to release the ebook on time but push the paperback release to July because that certain big box online store moved shipping physical books way down on its list of importance. So my launch has been strangely elongated and a bare simmer instead of having the chance to give off some steam. Hopefully I can celebrate it in person in public somehow later this summer.

3. What was the first thing you had published?
The first story I had published was “If Wishes Were Horses” at Strange Horizons in 2009 (and you can still read it there for free!). In late 2008, I went to my first ever SFF writing workshop, Viable Paradise, and took a draft of that story. Afterward, I decided to send it out, and SH took it. It’s very short so I give it to students to show them that a story doesn’t need to be a million words long, but I felt like a one-trick pony because it was a long time before I sold another story.

4. Which piece of writing are you proudest of?
Threading the Labyrinth, definitely. The basic description is that it’s about 400 years in a haunted English garden, so it took a lot of research, but I think I ended up with something special thanks to many people who helped me develop and edit it. And I can look back on it and feel proud that I wrote it and it’s published *and* I got a PhD with it (well, in part—I also wrote a 40,000-word critical commentary to go with it). I got my box of author copies the other day and it’s still surreal to see them.

5. …And which makes you cringe?
Luckily I was a bit older when I started publishing, and I had some experience in workshops, etc., and had heard the warnings, so I haven’t had a long history of publishing that includes possible clunkers at the beginning of it. I did publish erotica, which some people would cringe at, but I rather like that story—I was stepping out of my comfort zone! But I do cringe when I think about a bad contract I signed that gave a publisher a story of mine for 3 years that I never made a dime off of. I chalk that up to a learning experience and use it to warn students what to watch out for.

6. What’s a normal writing day like?
I don’t have “writing days” unless I completely clear the decks and get to concentrate on just writing. That happens incredibly rarely because of my job and life stuff. I would LOVE to be able to do that “writerly” thing of taking 6 months off to see what I could finish, and I envy writers I know who get to do it full time (but I know that is extremely rare). So, I tend to write in dribs and drabs when I’ve got time and brain space. Usually what happens is I get a weekend or a solo retreat if my partner is out of town; I will make sure I have food in so I have no reason to go out and I will sit in my pajamas, unshowered, and just GO. I write fast when the stars are aligned and have gotten 10K written in about 24 hours this way.

But I don’t have any rituals; no necessary coffee (smells great, tastes like poo) or tea or cigs; having some good dark chocolate with salt nearby helps; and I listen to music or noise without lyrics because otherwise I sing along as I write (which isn’t the best habit!). I don’t tend to edit as I go; I believe in just barfing it out on the page and then going back to figure exactly what in the hell I wanted to write the story about. That approach took a long time to learn how to do. Then I go back with that idea—the theme(s) or the EGG as I call it—and edit so I can answer the ‘so what?’ question. 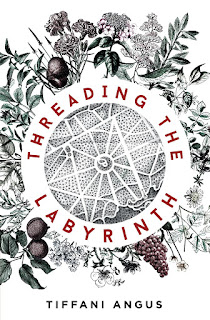 7. What works of yours would you recommend for people on lockdown and in need of a good book?
Definitely Threading the Labyrinth, especially if they miss big gardens or even outdoors and are worried about their place in the big scheme of things, in the future, and need reminding that our lives are about slowly building our stories. If they want more garden-related reading with a weird twist, they should check out my short stories “Fairchild’s Folly” (about correspondence between Thomas Fairchild and Carl Linnaeus, published in Irregularity), “What Cannot Be Described” (about Maria Sibylla Merian in Suriname in search of a mysterious moth, published in The Book of Flowering), and “On Tradescant Road” (about a time capsule that doesn’t move chronologically, starring John Tradescant, in BFS Horizons #4). Having said that, some of my other stories are available online—for free!—from various publishers; you can find links here.

8. What are you working on now?
I am trying to finish a novel I started about a decade ago, before I started Threading. It’s about an apocalypse, so not the best topic to be writing about right now, but I am close to the finish line. It isn’t a pandemic, though, so maybe it has a shot! It’s about women and children left behind after everything goes to hell, and about a mother and daughter trying to find each other in this new world. I was inspired to write it, in part, by that saying “If women ran the world there’s be no wars”—I wanted to call shenanigans on that and explore the darker side of things. For fun I call it Little House at the End of the World and writing it has, in part, fed into (and been fed by) my research into women’s bodies in apocalyptic fiction; I have become known in my circle as the “tampons in the apocalypse” person. I can think of worse things!