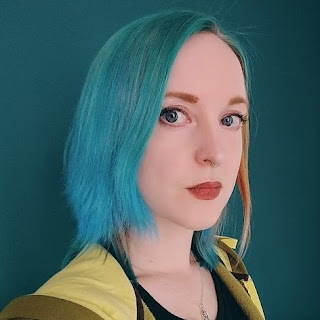 Laura Mauro started writing short fiction in 2012 and hasn't stopped since. Born in London, England, her stories have appeared in Black Static, Interzone, Shadows & Tall Trees, The Dark and a variety of anthologies. Her debut novella 'Naming the Bones' was published in 2017. Her short story "Sun Dogs" was a Shirley Jackson Award finalist, and "Looking for Laika" won the 2018 British Fantasy Award in Short Fiction. She loves Finnish folklore, Japanese wrestling and Russian space-dogs. She tweets at @lauranmauro

1) So, what’s new from you?So you might have heard in passing that I’ve got a little book coming out soon. My debut short story collection Sing Your Sadness Deep is being published by Undertow Publications, which is incredibly exciting. I’m especially thrilled about it because Undertow were actually the ones who published my first ever short story back in 2012 (‘Red Rabbit’) so it feels like something of a homecoming for me. The collection includes two completely new stories, titled ‘The Pain-Eater’s Daughter’ and ‘In the City of Bones’. The latter is the most recent story I’ve written, and like many of my other stories it’s about one of my weird obsessions – this time, about number stations.

2) How did it come about?
For ‘In The City of Bones’ - I’ve had an image in my head for a long time: a woman in some kind of cabin or shack, completely alone, as in apocalyptically alone – nobody else for miles around. It’s pitch dark, and it’s snowing. As she looks out of the window, she can see a shadowy figure approaching her, walking through an abandoned children’s playground. The number stations came later, largely because visualising this scene gave me the creeps, and number stations also give me the creeps. So I figured that if you smush two creepy things together they accumulate an even greater creepiness. Hopefully my maths is sound.

3) Tell us about the process of how you created it.
It sort of happened organically. I spent a lot of time listening to number stations and wondering what kind of utility they might have outside the popular explanation (it’s thought that they are coded messages used to communicate with spies in the field). Once I’d figured out the purpose they serve in the story, I then built up the rest of it. I found a suitably empty, apocalyptic location (Kadykchan, an abandoned city in far east Siberia). It turns out that this place already comes with its own horrific lore – it’s built on the Kolyma Highway, which was built by prisoners from Stalin’s gulags. Forced to work in terrible conditions – east Siberian winters are extremely harsh – a great many prisoners died, and because it was impractical to dig graves in the permafrost their bodies were interred into the road itself. Because of this, the Kolyma Highway is known as the Road of Bones. From that point on, the story basically wrote itself.

4) What was your favourite part of the process?
There was a lot of miscellaneous research on subjects I found fascinating. Researching Kadykchan was fascinating – you can find lots of photographs from people who’ve been bold enough to explore the region and drive the Road of Bones between Yakutsk and Magadan. One of the coolest things was finding a photo of someone’s abandoned home, still full of their belongings, and working the title of one of their books into the story. It was quite uncanny in a way, as I’d pictured the children’s playground in my original vision, and photos of Kadykchan tend to feature an abandoned playground quite prominently. Researching Siberian climate and fauna was really interesting as well. It’s the kind of landscape you can be quite poetic about.

5) What was the toughest part of it?
The protagonist is living with a congenital skin condition called Harlequin Ichthyosis, which is something I came across during my years in an antenatal clinic – no actual cases as it’s very rare, but plenty of literature. It’s quite a shocking condition when you first encounter it – google with caution as the pictures can be intense. Babies born with this condition have incredibly thick skin, almost like plate armour, which tends to split and crack painfully – the word ‘Harlequin’ refers to the appearance of the cracked skin, like a jester’s motley. There was a time when Harlequin Ichthyosis was a death sentence, and afflicted babies rarely lived beyond a year. These days, as we gain more and more understanding of the condition there are more and more cases of sufferers surviving into adulthood. The protagonist is one of these adult survivors. It was really important to me to make sure I got the facts right regarding living with this condition, so the research was far more intense. 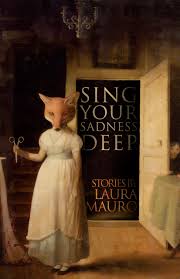 6) Is there a theme running through it?
I think the overall theme is about people who don’t fit into the world, and how those people often find one another. To be honest, that might be the accidental theme of my entire collection. It’s a subject I know a lot about.

7) If you had to sum this story up in three words, what would they be?
“They’re coming home”

8) Where can/will we be able to get hold of it?
“Sing your Sadness Deep” is available to pre-order here in both paperback and hardcover, and eBook will soon be available too. It’s going to be released around July, so very soon! I hope people will like it….!
Posted by Simon at Monday, June 03, 2019

Useful article, thank you for sharing the article!!!