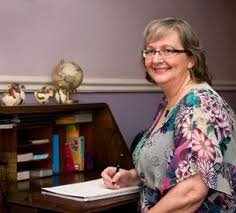 I've just heard that my old friend Terie Garrison passed away this morning from cancer.

We'd lost touch and hadn't spoken for a number of years, but Terie was someone to whom I still owe a huge debt of thanks. For about six years I regularly attended the South Manchester Writer's Group; Terie was the first person I knew from the group.

An American expatriate, Terie had been brought up an evangelical Christian, but had been excommunicated and was now a Wiccan (if I recall correctly.) She had an official letter of excommunication from her church, which she took some pride in; she occasionally joked about providing copies of the same letter to her friends (with their names in place of hers, of course) to be framed and hung about her home.

She could be quick to take offence at times, but she was funny and, more to the point, a good friend. It was Terie who administered a dose of tough love and hard-headed advice to me when I was at a difficult and painful point in my life. It was also Terie who helped get me out of a prolonged and miserable creative rut by introducing me to the works of Julia Cameron and Natalie Goldberg, through which I rediscovered the sheer pleasure of writing. My first collection, A Hazy Shade Of Winter, was dedicated to her.

Terie made her living as a technical writer, and also penned a number of YA books, including Changing Gears and the DragonSpawn quartet. I don't know too much about her life over the last decade; I drifted away from the writer's group and lost touch with all but a few of the people there. I got a call a few weeks ago to say that Terie was very ill; the hope was to arrange one last gathering of her friends for a sort of 'living wake.' Unfortunately, Terie was too ill for this to be arranged.

She passed away, as I said, this morning, and although I hadn't seen her in years I miss her already. Very much.

Farewell, Terie. If there's anything else after this life, may it be full of joy and peace.
Posted by Simon at Tuesday, June 04, 2019

Like you, I knew Terie sporadically over the years through writers groups and chat rooms. I loved her stories about writing, her stuggles with running a group and dealing with the personalities in it plus her books which I always looked up to her for. It's such an amazing accomplishment to write books. She was such a wonderful spirit. I loved talking to her. Loved her. And I'd so lost touch with her as well as stopped writing. But having heard she was sick and now realizing she had passed...I am saddened a lot and think of our time chatting. It's wonderful she had such good friends like you and others. She left a wonderful mark on this earth and her spirit soars now.