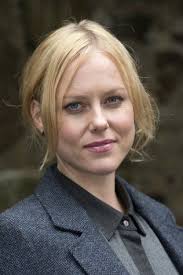 So, Cate and I watched the season finale of Westworld the other night, which was great. I think it's one of those shows I admire for its ingenuity and brilliant storytelling than actually love in the way I love shows like Battlestar Galactica, Game Of Thrones or The Wire, but nonetheless it's great.

[SPOILER ALERT: IF YOU HAVEN'T SEEN THE WESTWORLD FINALE OR THE BIT THAT CAME AFTER THE END CREDITS, LOOK AWAY NOW]

Yep, it was Armistice, played by Ingrid Bolsø Berdal. Apparently she's become a fan favourite, which isn't a surprise. She's one of Norway's leading actresses, but Hollywood only seems to have worked out what to do with her in the past couple of years.

Berdal's first lead role was in a horror film that made my Halloween Top 10 back in October - and still one of the only slasher movies I like - Cold Prey (2006),  together with its 2008 sequel, Cold Prey: Resurrection.

Directed by Roar Uthaug - remember that name, because you'll be seeing it again - this follows a group of Norwegian twenty-somethings who take refuge in an abandoned ski lodge in the mountasin range of Jotunheim after one of their group is injured. Huge creepy and atmospheric, it has great performances all round, particularly from Berdal as Jannicke, who's basically Norway's answer to Ripley. Mats Stenberg's sequel is almost as good as the first film, with Berdal reprising the lead role.

The next film I saw starring Berdal wasn't a horror movie, but a sweet, funny comedy drama from 2008 called De Gales Hus (the same year as Cold Prey 2!)  The title roughly translates as House Of Fools, and stars Berdal as Aina, a young woman who's institutionalised at the Varden Hospital after a suicide attempt. It manages to look out mental illness, depression and recovery in a sensitive and intelligent way, while being bloody funny and touching too. Also stars a couple of other Cold Prey alumni, Rolf Kristian Larsen and Fridtjov Såheim. This one hasn't had a UK release and you'll need to track down the Norwegian edition, but it's worth it. It's become one of my go-to comfort films.

And a couple of weeks ago we saw Escape (2012), which reunited her with director Roar Uthaug and Cold Prey scriptwriter Thomas Moldestad. Set in mediaeval Norway in the aftermath of the Black Death, is stars Berdal as Dagmar, the psychotic leader of a gang of bandits who kidnap teenager Signe after killing her family. Signe escapes, or tries to. Simple enough, but Uthaug is great when it comes to action scenes, cranking up tension and making the Norwegian landscape look stunning (admittedly, not a hard task) and is superb when it comes to the deeper emotional elements too. Berdal is fantastic as Dagmar, managing to make her a terrifying villainness, but also oddly sympathetic. I'm pretty sure someone at HBO saw this film and basically said "Okay, I think we've found our Armistice here..."

Berdal's also appeared as the Horned Witch in Hansel and Gretel: Witch Hunters (2013) and Atalanta in Hercules (2014).

We've loved every Roar Uthaug film we've seen, and his 2015 movie The Wave was no exception. It's basically a disaster movie, made on a small, tight scale, and packs more punch, soul and atmosphere than a dozen bloated spectacles of the San Andreas variety. Kristian (Kristoffer Joner) is a geologist in the lakeside town of Geiranger, where a rock-slide can trigger a potentially lethal tsunami. (This is a genuine threat in Norway, and very much a 'not if but when' scenario.) The first third to a half of the film is low-key and slowly building, with a small group of likeable characters (one of Uthaug's directorial skills is making good, nice people interesting!) and had Cate and I wanting to move to Norway - until the rock-slide actually happened and the sirens soundED, giving Geiranger's inhabitants 10 minutes to get to high ground before the 85 metre wave hits the town. That sequence alone is one of the most, riveting, frightening things I've seen in a long time, and thereafter the film doesn't let up, either dramatically or emotionally.

(Sidenote: The Wave co-stars Fridtjov Såheim, who seems to get killed in every film I've seen him in. Is he Norway's answer to Sean Bean?)

So there are some great viewing recommendations for you. In the meantime... did I mention that Berdal's also a singer and musician? I'll leave you with something showing a very different side of her, The Cactus Song.