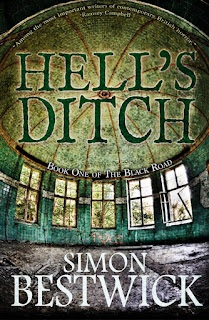 As the clock ticks towards Hell's Ditch's release on 1st December, various good HD-related things have come my way. Such as the galleys... well, 'good' is a relative term, as it meant several days of poring over printed-out PDFs with pen in hand (and I'm sure my editor, Anna Torborg, has been equally delighted with the dozens of with the hundreds of with the last-minute amendments I made. (Sorry, Anna. You're awesome.)

And the blurbs. I have blurbs, people! From, like, writers. Rilly good writers. And I didn't have to bribe anyone or hold their pets hostage or anything. Honest.

First up: Tim Lebbon, author of Coldbrook, The Silence and the new thriller The Hunt. The man, the machine, the author:
"Grim, dark, uncompromising, Hell's Ditch is a gripping apocalyptic novel, with flawed and compelling characters scraping what they can from the ashes."

Next: Pat Cadigan. Oh hell yes. The Pat Cadigan. [Mindplayers, Synners, Tea From An Empty Cup. If you don't know her, you ought to.]
"This is one of those stories that grabs you and won't let go until you find out what happens."
[Pat's response when I messaged her to say thanks: "Well, it's only true. You've really written something good."]

It's a bit difficult to do the Dance of Joy when there's only one of you without landing on the floor. But I managed. Mostly.

Anyway: this was a thing that happened - two things, if you want to be technical about it - and which was really nice. So there.

Tim, Pat - thank you. You guys are wonderful.