The Lockdown with... Daisy Lyle 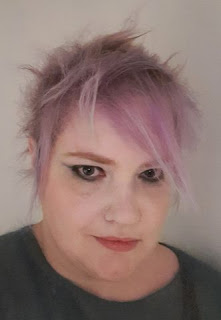 Daisy Lyle is a British dark fantasy blogger and writer based in Normandy, though she spends a great deal of time in Devon. She is a technical translator and former aerospace engineer. For the past sixteen years she has written a fiction blog called Darkling Tales (here and more recently here) where she reviews both recent supernatural fiction and lesser-known weird tale authors of the past. She also contributes book reviews to the UK-based Ginger Nuts of Horror website. Her debut novel is The Viridian Mode.

1. Tell us three things about yourself.
Thing 1: I have a lifelong fascination with pop videos, both rubbish and otherwise, and wish I could make them as a job. Although my favourite era of pop video is the first half of the eighties, recent favourites include “Mantra” by Bring Me The Horizon and ‘Many Moons’ by Janelle Monae.
Thing 2: I won the Inquisitor crossword twice but the first time they failed to send me my prize (the famed bottled of champagne), and the second time it arrived, but turned out to be cava. I look down on cava even more than I look down on people who do sudoku, and if I’d been at home when the bottle arrived I’d have smashed it in the yard. Instead my mother and her boyfriend drank it, the plebs.
Thing 3: I am intermittently a Friend of Arthur Machen (when I remember to pay the subscription) and I once had a beautiful dream that I met him in the Sheffield city centre branch of Boots and he said he was a Friend of Me too.
2. Many writers have said the COVID-19 outbreak and the lockdown have made it harder for them to create. Have you found this? Has the outbreak affected you as a writer and if so, how?
My output as a writer hasn’t been affected by the coronavirus at all. I live in rural isolation and have to deal with boredom a lot due to a series of poor life choices, so the lockdown barely affected my mood or productivity. Also, those dark mutterings about the collapse of the publishing industry will provide me with a perfect excuse for literary failure, should I require one.
3. What was the first review you ever wrote?
Before Darkling Tales I used to have another Livejournal “community” with an even more poncey name, Souls Adrift. On the historic day of August 12th 2004 I wrote a one-paragraph review of ‘Amour Dure’ by Vernon Lee. I was very enthusiastic about that story and still am, I’m a massive Lee fan. Quite a lot of people posted in Souls Adrift but I terminated its community status one day in a fit of pique, probably because people weren’t paying enough attention to me. That just meant I had to think up a whole new name when I inevitably made another community, and that’s how the new one ended up with the terrible name of Darkling Tales.
4. Which piece of writing are you proudest of?
When I was seven me and my twin sister compiled a survey about sex which included the question “Would you get a sex change?” This was quite edgy for the year [REDACTED]. Both our parents answered in the negative, though I am pleased to report that my twin sister is now my twin brother so the whole thing wasn’t a complete waste of time.
5. …and which makes you cringe?
Everything else I’ve ever written or tried to write. Also, I keep making factually inaccurate statements in my Darkling Tales posts, and once had to be politely corrected by Ellen Datlow for alleging that one of her anthologies didn’t have any non-UK/US writers in it. Along with Richard Dalby and Stephen Jones, Datlow is my favourite horror anthologist of all time, so this aroused an odd combination of emotions in me, namely giddy delight at my existence having been noticed by such a being, mixed with a scalding shame that has still barely faded to this day. Since then I’ve tried to be more careful with fact-checking but I still do stuff things up quite regularly.
6. What’s a normal writing day like?
It starts late – I’m very nocturnal and never write until the last four hours of my day (except for the month when I was doing the revision work on The Viridian Mode), though I get a lot of my ideas in the early evening walking about the countryside. After dinner I go up to my bedroom to grapple with said ideas until they turn into fiction. I try to write every night although as I work from home the day job does get in the way sometimes.
7. What work of yours would you recommend for people on lockdown and in need of a good book?
I would imagine The Viridian Mode is quite suitable for people undergoing the rigors of lockdown as it’s pretty escapist. Although it’s mainly set in the real world there are several incursions into another dimension, and while the fantasy is definitely of the dark variety it also offers romance and (one hopes) a few laughs. If people miss the great outdoors or being able to go on holiday to the countryside they might also enjoy its setting, which is on a decaying country estate in Devon, described at some length. In all my writing I am constantly trying to emulate authors like John Buchan, E.F. Benson and L.T.C. Rolt, who were fantastic nature writers as well as excellent ghost story authors. The Edwardian era and the 1920s were particularly good for writers of that kind although there are still some great ones today, such as Mark Valentine and Quentin S. Crisp.
8. What are you working on now?
I’m working on my second novel The Shrine of Zero. It’s my first attempt at largely urban fantasy and combines a lot of my hobby-horses: vinyl records, goth bands, British “new towns”, moths and, of course, bonkers Victorian religious cults and street traders. It’s going to be bigger and more complicated than my first novel but I’m having fun inventing a tailor-made magical system for one of my characters.
Posted by Simon at Friday, July 24, 2020

Hi Simon, Thanks for doing the author lock downs. Very interesting. It will give a good insight to writing when you can't go out. Still I miss the Vietnamese railway transport solutions. all the best Wayne.