The Lowdown with... Kit Power 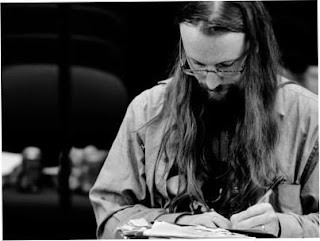 Kit Power lives in Milton Keynes and writes genre fiction that leans towards the dark side. These facts may or may not be connected. He also writes non-fiction, mainly for Gingernuts of Horror, and podcasts on various topics, including the movie Robocop. He has a Patreon, which provides early access to his fiction, non-fiction and podcasting on a weekly basis, for as little as $1 a month. He believes sleep is for the weak, and he is so very, very tired.

1.Tell us three things about yourself.I am double jointed, I was once made king of a fictional LARP land called Conovii, and I can prove that Robocop is, objectively, the greatest movie ever made. 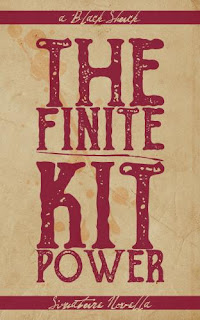 It was a novelette backed up by a long short story. The novelette was called The Loving Husband and the Faithful Wife, and was a first-person piece exploring - or attempting to - a space where the narrator would be convinced of one thing, and the reader another. I fell short of fully pulling that off, but did end up with a satisfying ambiguity, where many readers told me confidently what was really going on, and none of them agreed on what that was. Which was pleasing. The backup story, The Debt, was a gritty low-end crime drama that I’m still very fond of. The stories were published by a small press, and have since been reissued as part of Breaking Point, which is still in print with the Sinister Horror Company.

3. Which piece of writing are you proudest of? I’m still pretty proud of my first novel, GodBomb! I bit off way more than I could chew with that one, but I think it landed pretty well. My all-time favourite of my short pieces is a tale called The Bar at the Edge of the Desert. It’s an odd story, and told in a very oblique way, which is not my normal approach, but it has an atmosphere that (and I know you’re not supposed to say this about your own work, but) I find curiously moving.

For my non-fiction, it’s obviously got to be the book I wrote on Tommy for Electric Dreamhouse 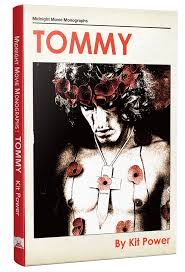 Press - that was a dream project for me, and I’m so proud of how that book came out. Though if I had to pick a single short-form essay, it would have to be the one where I prove, beyond doubt, that Robocop is the greatest movie ever made.

4. …and which makes you cringe? Juvenilia. Luckily lost to either the mists of time or my attic. Either way, safely out of reach :)

5. What’s a normal writing day like?
Hmm. Could do with more of them, to be honest, as the day job keeps me away from the keyboard more than I’d like. I guess a good day involves 30 - 45 minutes grabbed over lunch, then an hour at the laptop once the sprog is safely tucked away. I’ll normally get some more extended time over the weekend.

6. Which piece of writing should someone who’s never read you before pick up first? Actually, I think Breaking Point is a pretty good kick off point - it covers a range of styles, gives you a good sense of what to expect from me as a writer. And the last story in there, called Genesis, doubles as an introduction to Godbomb!, so if you enjoy it, it’ll lead to the novel nicely. It’s a good mix of splatterpunk, psychological horror and crime.

7. What are you working on now? Oh, only about a million things. I’m agonisingly close to finishing the first draft of my second novel, which I have co-authored with a friend. It’s a big departure for me, a kind of urban fantasy/science fiction novel set in the modern day, and I’m ridiculously excited about it…

But I can’t get it finished, because I am neck-deep in the first round of edits from the publisher for a novella that I am launching at Stokercon 2020 with Horrific Tales, about a very, very unusual apocalypse - but we’ll only be launching it if I get these damn edits done, and I will… 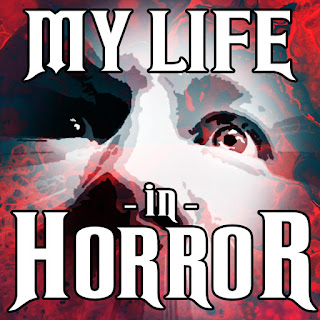 Horror Volume One! This book will pull together the first three years work from my regular Gingernuts of Horror column, alongside some essays written for other blog projects. Every essay has been revised and expanded, and the campaign features limited edition versions of the book that will never be for sale anywhere else, alongside signed paperbacks, discounted ebooks, and a few other fun perks.

The text is assembled and ready to go to the editors and formatters. A few people have read it through and have had some very nice things to say about it. And I’m proud of it. What I hadn’t reckoned with was, when the essays are assembled, as I have done for the book, not in order of publication but in the order I first experienced the subjects as a child or young man, what emerges is an autobiography of sorts, told through the lens of pop culture artefacts. That’s not something it would even have occurred to me to sit down and write, and yet here it is, emergent from the essays. It’s spooky, but a good kind of spooky, I think. Anyway, I’m really happy with it, the advance notices have been amazing, and hopefully, enough people will get behind the project to make it happen.
Posted by Simon at Friday, February 07, 2020