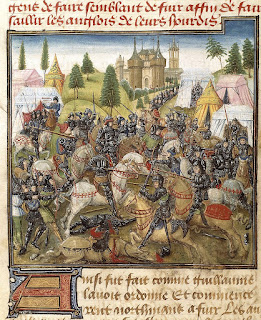 Something new's starting on my Patreon page: I'm going to be writing a story in daily instalments, in real time. Straight from my brain into my Patreon posts. It'll be available to all Patrons, and you can become one for just $1 a month.

This is something brand new - and I have to admit it's a bit scary - but the plan is that every morning I'm going to spend 20-30 minutes writing a new Patreon post, which will be the next instalment of an ongoing serial called The Harrowing. It's a horror story with a mediaeval setting, taking place in the winter that followed the Norman Conquest. I think I know where this story's going, but there are a lot of questions that will need to be answered along the way.

Hopefully it's going to become part of a bigger project called Ravenshore - which I'll telling my Patrons more about soon, along with the historical background to the story - but in the meantime, the first instalment will be up at 11 o'clock this morning GMT.

Hope to see you there.

Here's a quick taste of what to expect:

Twenty of them moving over a dull winter beach of muddy, rusty brown. A few men - two or three village greybeards and half-a-dozen monks in hoicked-up robes - and the rest women and children. Two monks pushed a handcart, bent double by weariness and hunger.

Above, against the empty white sky, crows wheeled. Inland, plumes of smoke hung black above the land. A bitter wind blew in from the sea.
A horse nickered, and hooves drummed. Out of the woodlands that lay up ahead broke a dozen horsemen; they spurred their mounts along the flat beach towards the procession.
Foam flew up in short-lived crystal white webs from where the horses tore through the grey-brown surf.
The group stopped. One of the younger monks stumbled forward and drew himself up, arms outspread to make himself a futile shield for the rest. One of the horsemen brayed a laugh; it echoed briefly, metallic and cruel, above the clamour of the hooves.
Then there were only the hoofbeats, and the brittle crash of the waves upon the strand. The line of men and women didn't move; the two who'd been pushing the handcart leant on the handles, heads bowed, as if taking pleasure in a rest that would soon become eternal. They'd all been marching a long dark time, seen friends and family slaughtered, homes burning, fields sown with salt. All that, and worse: it seemed a time of beasts and devils, from which death could only be a release...

Hey,I am regular visit your books and collections.you describe good about haunted places and stories.

Thanks for sharing the articles and mysterious stories.