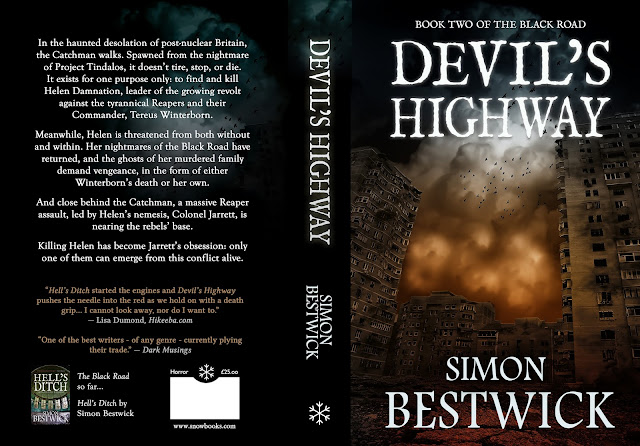 The paperback of Devil's Highway, the second book in the Black Road quartet, is released today.

You can buy direct from the publishers, or from Amazon.


In the haunted desolation of post-nuclear Britain, the Catchman walks. Spawned from the nightmare of Project Tindalos, it doesn’t tire, stop, or die. It exists for one purpose only: to find and kill Helen Damnation, leader of the growing revolt against the tyrannical Reapers and their Commander, Tereus Winterborn.

Meanwhile, Helen is threatened from both without and within. Her nightmares of the Black Road have returned, and the ghosts of her murdered family demand vengeance, in the form of either Winterborn’s death or her own. And close behind the Catchman, a massive Reaper assault, led by Helen’s nemesis, Colonel Jarrett, is nearing the rebels’ base.

Killing Helen has become Jarrett’s obsession: only one of them can emerge from this conflict alive.

And in others news, today I finished the first draft of the third Black Road novel, Wolf's Hill, which will be published in 2018.

Please share far and wide! Like an idiot (well, partly because juggling the new job with the writing in knackering me out) I completely forgot to do much to signal boost this one, and it's a book I'm very proud of. I hope you'll enjoy it too.

Basically, just imagine this as the theme music:

There's a chance you are qualified for a complimentary $1,000 Amazon Gift Card.