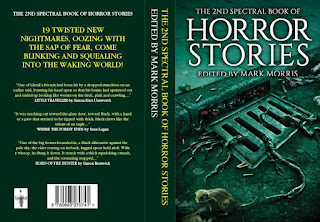 The main event of the week took place when Ellen Datlow published her longlist of Honourable Mentions for last year. (You can read its three parts here, here and here.) Among the tales listed no fewer than ten from The Second Spectral Book of Horror Stories:
'Mary, Mary' by Ray Cluley
'Marrowvale' by Kurt Fawver
'Who Will Stop Me Now?' by Cliff McNish
'Beyond The Wall' by Thana Niveau
'The Veils' by Ian Rogers
'The Larder' by Nicholas Royle
'Lump In Your Throat' by Robert Shearman
'Little Traveller' by Simon Kurt Unsworth
'Wrong' by Stephen Volk

'Horn of the Hunter' by Simon Bestwick.

Congrats to all the writers, and to editor Mark Morris for putting the antho together.

Other than that, there's the Joel Lane tribute antho Something Remains - but I'll blog about that elsewhere. Meanwhile, here are a few bits and pieces that caught my eye in the past week.

Laura Mauro, an excellent writer, wrote this piece in the last week - something which struck a chord with me and probably will with most writers. Yup, it's about that old friend of yours and mine, impostor syndrome...

It was luck, it was a fluke.And even if it wasn’t – even if that award nomination/sale/good review was legit – it doesn’t matter, because you’ll never produce anything of that quality ever again. The future is one failure after another. You’ll be the literary equivalent of that person who turns up to parties – the one nobody really likes but entertains anyway because they all feel a bit sorry for them. You know the one.

there's nothing you can do about it. The title sums it all up:

Change is inevitable. Resisting change is perhaps noble but ultimately futile. Managing change is wise, but even then, change – the abrupt collapse of the Roman Empire, the Norman invasion, the break-up of the abbey estates, the Enclosures Act, the arrival of the railway – can be disruptive and unexpected. That something else will come over the horizon to break down the walls is a certain: less certain is what that’ll actually be.

It's well worth a read.

And, as some of you may remember, I blogged a while back about the lost village of Tyneham. I found some more stuff relating to the place recently, so I blogged again here.