Things of the Week: 22nd July

Well, this week's been better.

The three of us - Cate and I and Priya - went to Edge-Lit in Derby on Saturday, and had a blast. It really was just the tonic. My self-imposed Facebook exile didn't magic away my anxiety and low mood (as doctors call it - low? It was bloody subterranean. I kept expecting to run into Peter Cushing and Doug McClure) but did a lot to reduce it.

Being among friends, spending time with people face to face, was huge as well. It was great to see Sarah Pinborough, Ray Cluley and Jess Jordan, Victoria Leslie, Lynda Rucker (fresh from winning the Shirley Jackson Award for Best Short Story!) and Sean Hogan, James Everington, Mark West, Andrew Hook and Sophie Essex, Nina Allan, Mark Morris, Gary McMahon, Conrad Williams, Alexandra Benedict, Johnny Mains, Emma Newman... and so many others. (The final event of the night was Johnny Mains being interviewed by Alexandra Benedict, but quite frankly 'unleashed' would probably be a better word. Gloriously funny, rude and indiscreet - but painfully honest, too. I suspect Alexandra needed a few large drinks afterwards.)

Talking of Sarah Pinborough, her excellent YA novel 13 Minutes came out in paperback this week. Cate got hold of it as soon as it came out and read it voraciously; I wrenched it from her grip immediately afterwards... 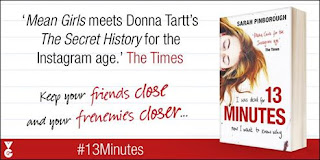 I don't remember how I ended up in the icy water but I do know this - it wasn't an accident and I wasn't suicidal.

They say you should keep your friends close and your enemies closer, but when you're a teenage girl, it's hard to tell them apart.

My friends love me, I'm sure of it. But that doesn't mean they didn't try to kill me.

13 MINUTES by Sarah Pinborough is a gripping psychological thriller about people, fears, manipulation and the power of the truth. A stunning read, it questions our relationships - and what we really know about the people closest to us ...

I went to see my GP this week, and am now back on Citalopram for the depression and anxiety. Some mild stomach upsets, but I'm feeling better already. I've been here before; hopefully things will be okay. 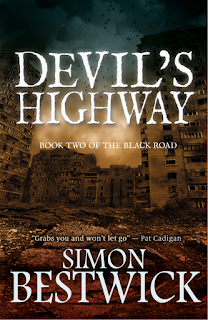 I know I've said this before, but never suffer in silence with depression. And don't listen to it. It's a liar. It will tell you that you're worthless, that everything you do is pointless and doomed, that nothing you've achieved is of any worth. And it isn't true. Be aware of the signs, and if they're there, see your GP. Get help. It's illness, nothing more.

Well, at least until Emma and Tik at Snowbooks come back to me with edits and notes. But that's half the Black Road now written, as good as I can get it. It's probably the most action-packed instalment of the series - not that any of the others are exactly quiet, but this book is built around a brutal siege in which Helen's old enemy Colonel Jarrett will stop at nothing to destroy the rebellion against the Reapers and kill Helen herself.

I'll be getting to work on the third book, Wolf's Hill, later this year, all being well. This one will be... interesting. More about that nearer the time. For now, I'm having a couple of days off to write short fiction...