Lessons, Liverpool, Loss of Face and Learning to Cope

Well, I finally finished work on The Faceless on the morning of Saturday 15th October- completing the last few edits with virtually minutes to spare before scooting off to Barmouth for a week of unwinding, as well as visiting my late gran's grave to pay my respects. Nearly five ruddy months of rewriting... but we'll come back to that.

Here's a funny thing. Part of the plot of The Faceless is based on the story of the Accrington Pals, who were wiped out on the first day of the Battle of the Somme: 1st July, 1916. As you can imagine, this and related subjects have been on my mind a lot over the course of the year as I pulled this monster together. But at last, so I thought, I could forget all about it.

The second day of 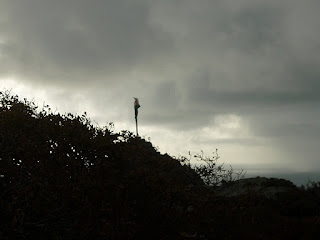 my hols, I climbed Dinas Oleu, the range of hills overlooking Barmouth, but went in a different direction from my usual route, climbing a peak I hadn't gone for before. The main thing that marked it out was the Welsh flag flapping atop it.

After a couple of hours of climbing, I reached the summit.... 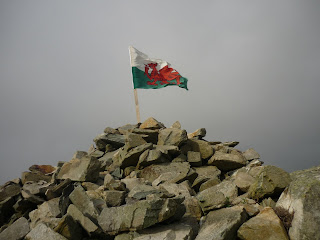 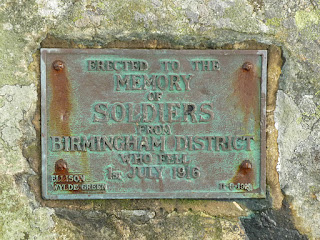 
Some subjects have a habit of following you around.

Anyway; the break was very welcome, but it's fair to say I hadn't expected the work of writing the damn book to go on quite this long. I made a hell of a lot of excess work for myself on The Faceless; it was a pretty big, complicated tale with a lot going on and I outlined the novel only sketchily. Result? A first draft of 160,000 words and a HUGE amount of rewriting to turn the whole mess into something readable.

So for the next one, I'm going to remember the lessons learned earlier this year from writing The Sight and The Children Of Moloch; outlining each story in advance resulted in a first draft that was very close to the finished product and needed very little work. Outlining each chapter as if it were a story might have the same effect on the next book. Hope so anyway: an ounce of preparation, with any luck, should beat a pound of rewriting. We'll see.

But that'll have to wait, as today the book came back from Jon Oliver at Solaris, with various edits. There's work to be done, and in the next week I'll be embarking on the next wave of rewrites... but on the whole, da boss is pleased. Which is nice.

It's been a funny few months. Since mid-August, I've been signed off work (in a call centre) with stress. One day I just couldn't seem to hack dealing with the customers. Looking back, there were a few days' warning of it, but on the whole it seemed very sudden. I always thought of this as something that affected other people, and of course when you hear someone's off with stress there's a tendency to wonder if they're swinging the lead. I'm less likely to do that now. Thanks to all the friends who sent kind words and thoughts, or lent me their ear. It's been appreciated. Had my first counselling session today, and I think it went well; I'm hoping to be back to work in the next month, but the whole episode's made me stop and think and take stock. There may well be some changes in the not too distant future...

Speaking of changes, a proper websitey thing is being put together, which means this blog's days are likely numbered. Thanks to all of you nice folks for reading it over the past three years; I'll still blog, of course, on the website when it's up.

Tomorrow I'm off to Liverpool to attend a Twisted Tales event at Waterstone's Liverpool One, and for coffee with the ever-reigning Cate (TM). So, onwards and upwards...
Posted by Simon at Thursday, October 27, 2011

Well done with "The Faceless", hope the rewrites go well and if you need a 2nd opinion, give me a shout!

You forgot to tell the 'YOU ALMOST DIED' story...

I'll have to slip that one in later, Cate.

I Saw Good post in you blog great. By Postcard Printing with Door Hangers

Thanks for the post. You should take part in a contest for one of the best blogs on the web. I will recommend this site...
driving lessons liverpool

Thank you to share such a great information about Driving lesson.

Can I simply just say what a relief to uncover somebody that really understands what they are discussing on the net. You actually realize how to bring an issue to light and make it important. More people should check this out and understand this side of your story. I was surprised that you aren't more popular because you surely have the gift. manfaat glutatgione