Angels Of The Silences is unleashed... 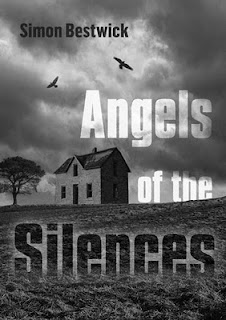 ...well, almost. It's now about to go to print, as a tasty little chapbook from that nice Mr Chris Teague's Pendragon Press. A mere three of your English pounds, or whatever that translates to in dollars, euros, yuan, yen, galactic groats, Martian money, Cthuloid cash or (insert currency unit of your preference here.) Fan, dabi, and not forgetting dozi.

So, what's it all about, Alfie? Well, without revealing too much (i.e. nothing you won't learn on the first page) here's the publisher's blurb:

Emily and Biff are seventeen and best friends. They have also been dead for nine months.

Compared to certain stuff I've written, such as The School House or The Narrows , Angels is almost cuddly. Almost. Or as close to it as you can get. And, as you can see, it also has a truly stonking cover by Mr Neil Williams.

Come on- what else can you get for three quid that's this much fun? (Don't answer that.)

Pendragon are also doing an offer whereby if you order a copy of the limited hardback of We Fade to Grey (which features the aforesaid The Narrows- selected by Ellen Datlow for The Best Horror Of The Year, shortlisted for the British Fantasy Award... I've probably banged on about that so much you probably know this better than me by now :D ) then you will receive a copy gratis. So there you go.

eToro is the most recommended forex trading platform for new and professional traders.