Shameless Pluggage #2: The End Of The Line 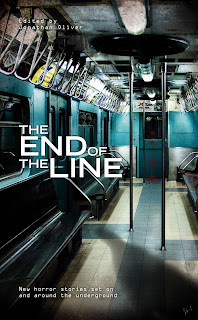 Back again, this time to let you know about The End Of The Line, another anthology I'll be popping up in down the line (as it were). This one comes to you courtesy of those fine people at Solaris Books and discerning editor Jonathan Oliver.

An anthology of Underground horror.

In deep tunnels something stirs, borne on a warm breath of wind, reeking of diesel and blood. The spaces between stations hold secrets too terrible for the upper world to comprehend and the steel lines sing with the songs of the dead.

Jonathan Oliver has collected together some of the very best in new horror writing in an themed anthology of stories set on, and around, the Underground, the Metro and other places deep below.

My story 'The Sons Of The City' will be in there alongside stories from Gary McMahon, Adam Nevill, Joel Lane, Mark Morris, Christopher Fowler, Stephen Volk, Al Ewing and many more besides, including the great Ramsey Campbell.

Due for release November 15th 2010, and all for £7.99. What else can you get for that kind of money that'll give you that much pleasure? Er... don't answer that. (Especially not with 'the new Dan Brown book', or I'll have to hunt you down and kill you.)

Available for pre-order here.
Posted by Simon at Thursday, June 10, 2010

Labels: shamelessly bigging myself up, the end of the line

I love that cover. I've seen the antho mentioned in other places, good to know you're in it.

Thanks Cate! Yes, there hasn't been a full TOC published yet, so I had to rely on my memory (a dodgy undertaking at the best of times.) I had the pleasure of hearing Ramsey Campbell reading his story for the anthology at WHC back in March, and it's a good 'un. So this should be a good little anthology.

Oh, just remembered- not posted that cake picture yet, have I..? :D

I have to agree, that's a brilliant cover. One of those that makes you want to read the book. Congratulations, Simon, in getting a story in it.