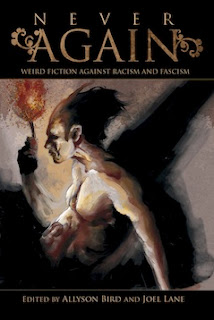 I've been accepted for a few anthologies this year, but none I'm prouder to be included in than this:

Never Again is an attempt to voice the collective revulsion of writers in the weird fiction genre against political attitudes that stifle compassion and deny our collective human inheritance. The imagination is crucial to an understanding both of human diversity and of common ground. Weird fiction is often stigmatised as a reactionary and ignorant genre - we know better. The anthology will be published by Gray Friar Press in September 2010, and edited by Allyson Bird and Joel Lane.

It will be a mixture of original stories and reprints from Ramsey Campbell, Lisa Tuttle and Joe R. Lansdale amongst others. Never Again is a non-profit initiative aimed at promoting awareness of these issues among readers and writers of weird fiction. The editors, authors/artist and publisher will receive no fees for this work. Any profits made from sales will be donated to anti-racist or human rights organizations, e.g. The Sophie Lancaster Foundation.

The Sophie Lancaster case was one of the most revolting crimes I've ever encountered, and there are few things that fill me with greater loathing than fascism or racism. Or homophobia, for that matter. Prejudice and hatred based on ethnicity or sexuality is contemptible and pathetic. The political organisations that attempt to exploit those impulses and gain power from them- such as the BNP under the repulsive bigot Nick Griffin- are the vilest of the vile and must be defeated.

I'm delighted to announce that my story 'Malachi'- first published in my collection A Hazy Shade Of Winter- is to be included in Never Again. I hope you'll buy the anthology, because the money you spend on it will go to as just and worthy a cause as you could hope to find.
Posted by Simon at Saturday, June 19, 2010