Ukraine, and what you can do 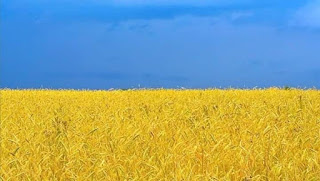 As you'll all know, Russian forces began an invasion of Ukraine on Thursday, in a blatant act of military aggression by Dobby Vladimir Putin. (That's the only joke I'll be making in this post, so enjoy it.)

The Ukrainian military - and people - are putting up the kind of resistance that can only be described as awe-inspiring. Grandmothers give sunflower seeds (the national flower of Ukraine) to Russian soldiers, telling them to put them in their pockets so that sunflowers will at least grow when they die. A young soldier, Vitaly Skakun Volodymyrovych, sacrificed himself to blow up a vital bridge and delay the approach of Russian tanks. The tiny garrison of Snake Island in the Black Sea died to the last man rather than surrender to a Russian warship (and actually turned up the volume on their loudspeakers to make their last words - "Russian warship, go f**k yourself!'" as loud and clear as possible.)

War is vile, and brings out the worst qualities of humanity. Sometimes, though, it also shows some of the best - courage, self-sacrifice, endurance and compassion. But acts of self-sacrifice, such as Volodymyrovych's and the Snake Island garrison's, shouldn't be necessary.

How will this end? I have no idea. In the meantime, I've been trying to find out what I can do as an individual to support Ukraine? It hardly needs saying that sticking a Ukrainian flag on your Facebook profile pic isn't going to help anyone in concrete terms.

I don't know about you, but as well as being a complete physical coward I'm also something of a physical wreck, and wouldn't be much use to any army except as a sandbag. So here are some options:

The Red Cross have launched a crisis appeal, which you can donate to here.

Care International are providing emergency relief for their partner People In Need. You can donate here.

SumOfUs are also taking donations for aid to Ukraine here.

For anyone who wants to involve themselves more directly, the Kyiv Independent has an article here on how to support the Ukrainian Territorial Defence Force as a foreigner, including enlistment. (This article is a month old and may be out of date, but if nothing else might at least shut up a few of the inevitable tedious bar-room commandoes who'll be spouting on about how they'd show the Russians a thing or two.)

ETA: Ukrainian feminist Olesia Sagaydak on how to help women in Ukraine.

ETA: Donate to UN Populations Fund to support women and girls impacted by the conflict here.

Countries neighbouring or close to Ukraine such as Poland and Estonia are waiving visa restrictions for Ukrainian nationals fleeing the war - including pet passports in Poland's case - as has the Irish government. The UK government has, (of course, being arseholes) done no such thing (although Boris Johnson did light 10 Downing Street up in the colours of the Ukrainian flag last night - words fail.) Change.org has a petition here to get them to waive restrictions as well.

Please share this post as widely as possible. If you're aware of any other ways in which ordinary citizens in the UK can provide any form of concrete support to Ukraine, please let me know and I'll update this post - I want to make it as helpful a resource as I can.