Roth-Steyr Countdown Day One: A Book for Halloween 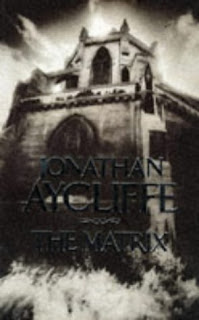 Saturday brings both the best night of the year, and the launch of my novella Roth-Steyr from Black Shuck Books! My skull-shaped goblet of blood runneth over...

So, in the coming week, I'll be posting a series of (hopefully) cool and groovy links and articles. Expect interviews, real-life mysteries, and more besides...

To kick it all off, here's a recommendation for some suitably spooky reading matter.

Horror fiction is often at its best in the short form. Novel-length stuff is hard to do really well, but there are those who manage it (Ramsey Campbell springs very much to mind.) Today's blog is about one novel I always think deserves more love: The Matrix by the ever-underrated Jonathan Aycliffe.

Jonathan Aycliffe is a pseudonym of Irish author Denis MacEoin, who's also written a series of dark, intelligent and atmospheric thrillers as Daniel Easterman. (I particularly recommend the 1990s novel Name Of The Beast, an all too prescient and plausible tale of Islamic fundamentalism, backed by an unholy alliance with European fascists, rising to power in Egypt under the leadership of a former Catholic priest who may be in fact the Antichrist. It may be a political thriller, but it also runs along the edge of horror too.) His first novel under the Aycliffe byline was 1991's chilling Naomi's Room, which is a superb book in its own right - and, with its Christmas setting, an excellent pick for another time of year. This was followed by Whispers In The Dark and The Vanishment, with The Matrix appearing in 1994. There have been more since - The Lost, The Talisman, A Shadow On The Wall, A Garden Lost In Time and The Silence Of Ghosts - and his infrequent short stories are also well worth seeking out. I was very proud to publish one of them, 'The Christmas Present', way back in 1998.

So, onto The Matrix.

I once described The Matrix (no, nothing to do with the Keanu Reeves films) as the kind of book Dennis Wheatley might have written if he'd been able to write. A slim, beautifully concise novel, it's a tale of Black Magic, and reaches heights of terror M.R. James would have wholly approved of.

Following the death of his young wife from cancer, Andrew MacLeod, a young academic, takes on a research post at Edinburgh University, studying occult and religious groups. Initially, it's only a professional interest, but he's drawn into a world of crystal-gazers and Theosophists, he finds a kind of solace in their rituals. But then, in the library of one of the occult groups, he finds a very old book, called the Matrix Aeternitatis - the Matrix of Eternal Life. In it is a woodcut so horrible he almost shuts the book at once... and yet his attention is compelled. But as he studies the book, something begins to move on the floor above him and descend the stairs. And Andrew is alone in the building...

That's only the beginning, though. Soon Andrew encounters Duncan Mylne, an influential advocate (Scottish legal representative) who has a knowledge of the occult that the people Andrew has previously encountered can only dream of. As his professional and personal life fall apart, Andrew is drawn into Mylne's tutelage. When he finally realises the kind of man he's become involved with, he attempts to break away from Mylne's control - but it may be too late. Because Mylne has a very specific purpose in mind for Andrew, and Andrew alone...

What makes The Matrix work so well? Part of it is Aycliffe's precise, elegant, even beautiful prose. 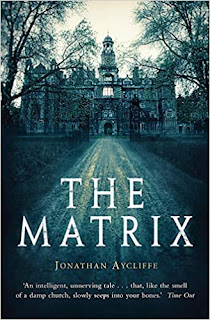 Terror is conjured by hints and shadows and glimpses, memorable images sketched in the reader's mind with enviable deftness and economy that linger and grow. There's very little physical horror here, and what there is is usually glimpsed from the corner of the eye. The novel's tone remains level and restrained no matter how dreadful the events, which only makes its eerie atmosphere and brooding dread stronger.

The Matrix is a slim, concise book, as I said earlier, which makes it a novel that can be read in a couple of days. Or even one. Maybe even a single night. Maybe not if you're on your own in the house, though.

And you can pre-order Roth-Steyr here.

Pop back tomorrow for the next stage of the countdown...