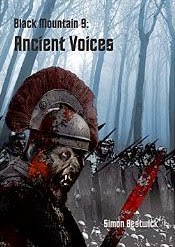 Wotcher folks. I just realised I hadn't blogged about the latest episode of Black Mountain, so here I go...

The ninth instalment, Ancient Voices, came out at the beginning of September, and delves further back into Mynydd Du's history than ever before... all the way back to Roman times.

North of Mynydd Du lie the pine trees of Coed Dinas: 'the wood of the fort.' But which fort? Rob Markland, digging ever deeper into the secrets of the mysterious Bala Triangle, was determined to find out.

'His hands were webbed paws, from which sprouted claws as long and sharp as daggers. Bristles of coarse black hair had sprouted in clumps across his face, his mouth was lumpily misshapen from the long curved fangs it proved to contain, and his eyes glowed red. Even as they watched, his jaws were lengthening...'

The artwork is by the ever-reliable Neil Williams, and you can buy Ancient Voices here (UK) and here (US.)

Meanwhile, I've just finished Part 10, The Watcher, which ought to be out in the next week or so, and am about to get started into the final instalment, due for release on Halloween.
Posted by Simon at Friday, September 26, 2014