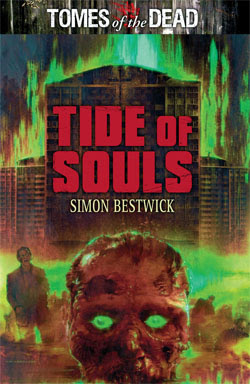 Tide Of Souls.  My first novel, published by Abaddon Books.
It's not just the waters rising...

Flash floods devastate Britain. But the terror is just starting, as an army of the living dead emerge from the waters to hunt down the survivors. For Katja, after a year held captive by a brutal vice ring, it's a constant fight to stay alive, but also a chance to win her freedom.

McTarn, an ex-soldier haunted by his past, is press-ganged into a mission - to retrieve a scientist from an isolated northern village. When floods cut them off, he has to fight both the walking dead and his own demons to protect his men.

Stiles is the man they sent McTarn to fetch. Although apparently insane, he may be McTarn and Katja's only chance to halt the legions of the dead closing in on their refuge in the bleak Lancashire hills. And if they fail, death will be the least they have to suffer...

'With lashings of violence and gore, it could easily be dismissed as lurid pulp fiction, but it is saved by the quality of the writing. Simon Bestwick writes with great imaginative flair and an excellent grasp of colour and narrative pace. If you are going somewhere hot, this will chill the spine nicely.' -The Daily Telegraph.

'A powerful, entertaining novel written in crisp, addictive prose... his name has joined the ranks of those whose future fiction I shall purchase without hesitation.'  -Matthew Fryer.

'Bestwick paints an incredibly bleak picture of civilisation’s collapse; fully immersing the reader in a world that is sliding irrevocably downhill... What you’re getting for your money here is a brutal and intense ride on the waves at the end of the world.'  -Graeme's Fantasy Book Review.

'...breaks free from cliché and manages to be both profound and moving.' -Hub Magazine.

Available in both print and ebook formats