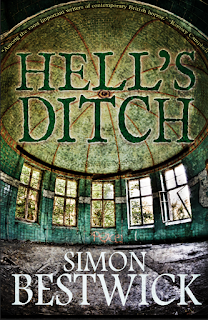 My third (or fourth, if you count Black Mountain) novel, first published 2015 by Snowbooks.

Book One of The Black Road.

The dream never changes: a moonless, starless night without end. The road she walks is black, bordered with round, white pebbles or nubs of polished bone; she can’t tell which but they’re the only white in the darkness, marking her way through the night.

In dreams and nightmares, Helen walks the Black Road. It leads her back from the grave, back from madness, back towards the man who caused the deaths of her family: Tereus Winterborn, Regional Commander for the Reapers, who rule the ruins of a devastated Britain.
On her journey, she gathers her allies: her old mentor Darrow, the cocky young fighter Danny, emotionally-scarred intelligence officer Alannah and Gevaudan Shoal, last of the genetically-engineered Grendelwolves.
Winterborn will stop at nothing to become the Reapers’ Supreme Commander; more than anything he seeks the advantage that will help him achieve that goal. And in the experiments of the obsessed scientist Dr Mordake, he thinks he has found it.
To Winterborn, Project Tindalos is a means to ultimate power; to Mordake, it’s a means to roll back the devastation of the War and restore his beloved wife to the living. But neither Winterborn nor Mordake understand the true nature of the forces they are about to unleash. Forces that threaten to destroy everything that survived the War, unless Helen and her allies can find and stop Project Tindalos in time.

A brutal and unrelenting post-apocalyptic dystopian adventure novel that manages to entertain and enlighten in equal measures.   - Ginger Nuts of Horror

With a pitch-perfect dystopia, plenty of violent action, and a raft of absorbing characters, it was one of my top reads of the year and ensured it finished on a thoughtful and explosive high. I just fell into this perfectly-paced and very well written book. Like Adam Nevill’s apocalyptic Lost Girl, it can be read as a gruesome thriller but also enjoyed for its thoughtful layers and complex moral core, and I can’t wait for the next instalment. - Welcome To The Hellforge

I loved the time I spent on the world of Hell’s Ditch and I look forward with much anticipation to the follow ups. It’s a book I recommend highly. - Dark Musings

A rollercoaster ride that clatters along at a wonderful pace and is a fantastic start to what promises to be an engaging and horrific series. Bring on the next book! - Pop Mythology

Darkly entertaining and hugely ambitious in scope... I look forward to discovering where The Black Road series will take us next. - The Eloquent Page
Available direct from the Snowbooks website in hardback and ebook now, or on Amazon.

The paperback of Hell's Ditch will be released in March 2016. The second book in the series, The Devil's Highway, is coming in October 2016.