The Lowdown with... Livia Llewellyn 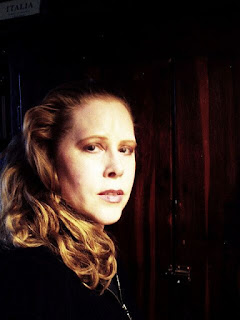 Llewellyn on Llewellyn: "Long ago, in another millennia, I was born at the icy edges of Anchorage, Alaska and spent my childhood in the quiet woods of the Pacific Northwest. And now, in this early sliver of the new thousand year era, I am a tiny speck in a frenetic East Coast megalopolis that is one of the centers of the human world. I’m not quite sure how that happened….By day I’m a secretary. I file papers, create spreadsheets, update calendars, weep in the restroom stalls — the usual secretarial things.

At night, I write about lonely girls who sing to colossal sentient engines born of Tesla’s secret journals, long-horned demons lost in endless tracts of suburbia, giant biomechanical insects and their sassy female charges, mothers who are good monsters, monsters who are good mothers, the mysterious labyrinth of human-&-creature couplings, the joys of solitude and the horror of the broken heart."

Livia's website is here; her story collection Engines Of Desire is here, and she Tweets here.

Oh, and her story 'Stabilimentum' is now online at Pseudopod Magazine today!

1. Tell us three things about yourself.
I’m trying to think of something that doesn’t involve ants or bad apartment situations. Hmm. Well, 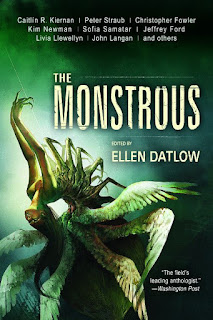 when I was fifteen, my father taught me how to drive in the Tacoma Cemetery—he figured everyone there was already dead, so I couldn’t possibly do any more harm to them. My mother once closed the garage door on me—I was about seven, I was throwing some fit and wouldn’t come out to the car, and so she started to close the garage door and I slid down under it at the last minute because I didn’t want to be locked inside, and BAM! Garage door on my ass. My mother laughed. I wasn’t hurt, and I deserved it, I was being a complete little shit. Oh, and my terrible apartment has about a hundred thousand ants living in it. Sorry, I had to. But, my lease is up next February! I’m positively giddy at the thought of all the new terrible places I might be living in next year.

2. What was the first thing you had published?
I won second place in a flash fiction contest at ChiZine Magazine with my story “Brimstone Orange”, and it was published there in 2005. That was both my first publication and my first story ever written. But it was very much a fluke—it was almost a year and a half before I had my second piece published. 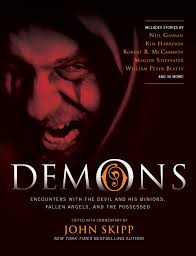 3. Which piece of writing are you proudest of?
The story “…and Love shall have no Dominion” (about a demon who falls in love with the woman
he’s brutally and violently possessing), which I don’t think a lot of people have read. But it’s going to be in my next collection, so it’ll be interesting to see what the reaction is from readers and reviewers. It wasn’t easy to write, and it’s not an easy read. [SB: this story was first published in Demons, ed. John Skipp.]

4. …and which makes you cringe?
Looking over what I’ve had published, there isn’t anything that really makes me want to crawl into a hole and die—although I’m sure there’s a lot of people who are thinking that I seriously need to look again. However, I’ve written plenty of stories like that. My “trunked” folder is larger than my “published” folder for a very good reason.

5. What’s a normal writing day like?
I have an office job to pay the bills, so my normal writing day is confined to a few hours every evening, and whatever I can get done on the weekends. I write at home, I can’t afford to write in coffee shops or cafes (they’re too crowded nowadays, anyway—everyone’s a writer, apparently!), so I just sit on my couch in the living room with the lights dimmed, and write on my laptop while listening to music. That’s it, it’s very boring and unglamorous. 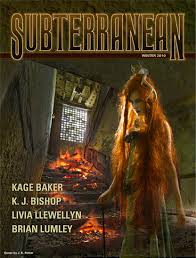 6. Which piece of writing should someone who’s never read you before pick up first?
I think they should read the novella “Her Deepness”, which is still online at Subterranean Magazine. It has a fair amount of everything I love writing: an emotionally (and often physically) tortured female protagonist who is also somewhat of an antagonist, and is in all likelihood not fully human; cosmic and geological Lovecraftian horror; vast, unnatural urban environments; unexplainable systems of logic; and—of course!—a bit of rather creepy sexual imagery.

7. What are you working on now?
I have four short stories that are due to various places at the end of the month—one to an anthology, two original pieces for my upcoming collection Furnace (which will be out in February 2016 from Word Horde Press), and one piece of erotica for my Patreon account. All are close to completion, so it’s just a matter of keeping my butt planted on that writing couch. Letting the dishes pile up in the sink also helps. That might be why I have ants…
Posted by Simon at Friday, October 02, 2015