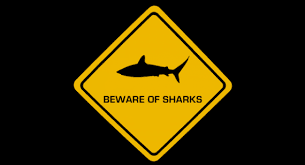 This should go without saying, but - WRITERS, DO NOT PAY TO BE PUBLISHED. There was a name for publishers that charged you money to get your work in print. Actually, there were quite a few names for them, many heavily Anglo-Saxon and some quite creative, but the one most repeatable in polite company was 'vanity press.' And these were, and are, to be avoided like the plague by anyone who takes their work seriously.

Money, as the saying goes, flows towards the writer, not away. Of course, self-publishing blurs that line somewhat, as you have to make some outlay in order to get your work out there, but anyone setting themselves up as a publisher should be paying you - in royalties, if not advances.

Unless of course, on top of everything else, you want to pay money for someone to make you a book trailer like this:

Don't all shout at once.

Thanks to everyone who 'attended' the online paperback launch of Hell's Ditch. I'm told that sales are pretty healthy. The 'off-line' version's still to come - next week. Holy shit. I've done the odd book launch at first, but not one like this: at Waterstones, for a novel, with the likes of Ramsey and Conrad there to make me look good. I'm starting to get a wee bit nervous, I admit. Anyway, if you're in the Merseyside area and you're free that evening, I hope you'll swing by (I need all the help I can get.)


Speaking of which, Gareth Hughes has reviewed Hell's Ditch over at Do They Have To Use Drums? He says: 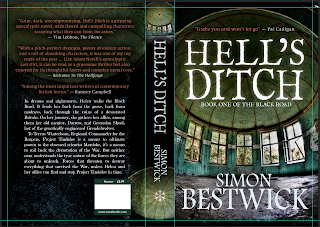 'Bestwick’s writing is some of the most compelling I’ve ever encountered. It may well take you a chapter or two to really get invested, but once you are, you will sink into Hell’s Ditch and not come out the other end until you’ve finished it.'

In current writing developments, The Devil's Highway is now underway and rolling along. Currently on Chapter 8, of a grand total of thirty (plus epilogue.) This is one of the most intricate things I've done, narratively speaking, and one of the most relentless. Or it will be if it actually works as intended. If it does, of course, it should flow so naturally as to look a piece of piss, and everyone will assume I rattled it off in an afternoon...

The third round of edits on my crime novel should be with me next week, bringing us ever nearer to the point when it actually starts going out to publishers. I take a certain amount of pride at having been responsible for my agent sending tweets like these: 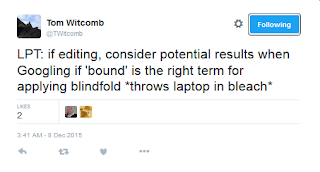 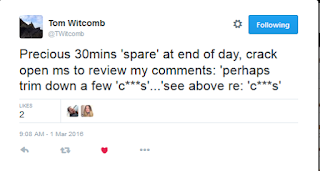 Simon Bestwick: lowering the tone of conversations since 1976. 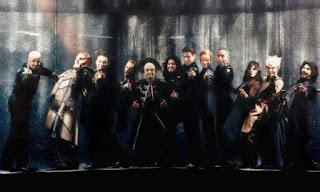 I've been subjecting Cate to Babylon 5, which I got hold of on box set recently, having loved the series when it was first broadcast in the 1990s.
Cate isn't a huge fun of space-based stuff, but given that she became a huge fan of the rebooted Battlestar Galactica, she was up for giving it a try.

Sadly it's not aged well. Special effects are always the first thing to date - although the Shadow vessels still look eerie - but acting is... well, by the standards of US TV in those days, it's pretty good, but back then there was a much bigger gulf in terms of quality between TV work and the movies. It's basically soap-opera standard for the most part, and a lot of the dialogue comes across as portentous and stiff. 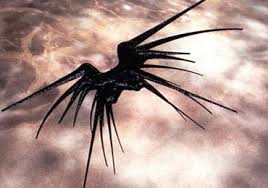 We're into the second season now, which does mean a general uptick in quality; Season One suffered from a lot of 'padding' episodes, not to mention Michael O'Hare. I feel bad slating the guy's performance as Commander Sinclair given that, as was revealed after his death, he was actually suffering from some serious mental health issues at the time - hence his departure from the show. So I wanted to like his performance more than I did. But now Bruce Boxleitner's in the saddle, and starting to settle in. There've been a few episodes that still hold up, that made me laugh or gave me the kind of thrill I remember from the show's first run, so I haven't given up hope, but it's not looking good for Cate ever becoming a huge fan.

Even so, B-5 was one of the first shows of its kind to tell an overarching story that ran throughout the series, where characters changed, developed and grew, where the familar set-up of the show altered, sometimes out of all recognition. It showed that it could be done successfully, and it opened the way for more. Without it, there'd have been no Buffy The Vampire Slayer, and maybe no Battlestar Galactica either (and that's just two examples.)

Last night, we also watched Tom Shankland's The Children; I'd only seen this once before and forgotten how genuinely unsettling it is. Shankland's only films to date are this and WΔZ - both of which I can highly recommend. Since then he seems to have mainly worked in TV - directing, among other things, the short-lived BBC series The Fades, plus Ripper Street and The Missing. Hopefully he'll do another film at some point.

Anyway, that's all for now. Have a good weekend!


Get your own valid XHTML YouTube embed code
Posted by Simon at Friday, March 04, 2016