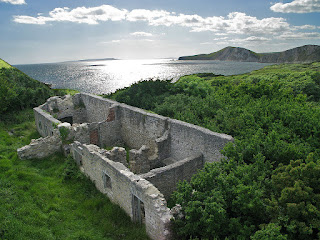 A while back, I blogged about the abandoned Dorset village of Tyneham, aka 'the village that died for England.'

As I've said elsewhere, lost and abandoned places fascinate me - and others, too. Tyneham's no exception. I found a couple of pieces about the place on YouTube that variously moved or intrigued me, so I thought I'd share them.

First up, here's Remembering Tyneham, a short (four and a half minute) documentary about the village and including an interview with Arthur Grant, one of the last surviving villagers. A sweet old man; I ended up wanting to give him a hug after watching this, but as anyone will tell you, I'm a big softy.

And here's some drone footage of the village - really stunning stuff. Haunting and beautiful.

If anyone else has footage or info about Tyenham, feel free to get in touch and I'll share it on the blog.
Posted by Simon at Friday, August 05, 2016