The Lowdown with... Adrian Tchaikovsky 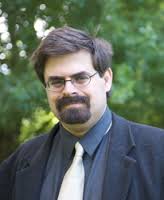 Adrian Tchaikovsky is the author of the acclaimed Shadows of the Apt fantasy series, from the first volume, Empire In Black and Gold in 2008 to the final book, Seal of the Worm, in 2014, with a new series and a standalone science fiction novel scheduled for 2015. He has been nominated for the David Gemmell Legend Award and a British Fantasy Society Award. In civilian life he is a lawyer, gamer and amateur entomologist. Last week, Adrian won the Arthur C Clarke Award for his novel Children Of Time. 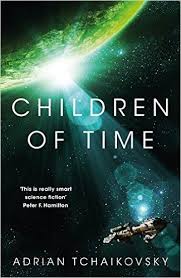 - I’ve had 14 novels out in 8 years, plus novellas and short stories. In my own head I am absolutely still “the new guy”. Sometimes people I meet at conventions are apologetic about not having read anything I’ve written. In truth I’m still surprised when someone has. Imposter syndrome is alive and well.
- When I was at primary school I used to bring insects, reptiles and other ‘undesirables’ into everything. I would doodle them in the margins in maths and try to twist any topic whatsoever so that I could bring in some sort of creepy crawly. My teachers repeatedly told me that this would get me nowhere.
- I’m a lawyer in my day job because of a bizarre series of coincidences. My first job was in a recruitment agency dealing solely with the building trade – so imagine a 22 year old with a degree in zoo/psych and no interest in football trying to be pally with middle-aged brickies and plumbers. That went about as well as you’d expect. Looking for a new job, the only place hiring was the Legal Aid Board which at that time was desperately trying to clear its backlog because of the incipient Woolf Reforms. That introduced me to the legal world through the back door, and because there was no ready career progression at the LAB, I got a job as a legal secretary because my writing had given me a decent typing speed. From there I trained as a legal executive.

2. What was the first thing you had published?
Back in the mid 90’s there was a tiny magazine called Xenos which published (unpaid) short stories. They did a handful of mine, and then I actually won their annual competition around I think 1996, and the mag promptly folded before they could publish the winning story. Because of course. That was a bit of a blow, and it was a decade before I got anything else in print. The first story of mine they published was ‘The Greatest Warrior in the World” which has not been seen since. The winning story – which is the first thing I wrote that I think was of properly professional quality, was ‘The Roar of the Crowd’ which can be found in Newcon’s Feast and Famine collection. 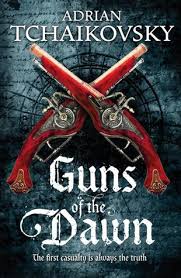 3. Which piece of writing are you proudest of?
Aside from the abovementioned ‘The Roar of the Crowd’, which I’m still damn proud of, it’s hard to choose between any of the novels. Shadows of the Apt is probably always going to be my magnum opus, if only because I’m never going to write anything as magnum as that ever again. Guns of the Dawn has perhaps the most satisfactory self-contained story arc. However, Children of Time is the stand-out, because I was going outside my comfort zone as a fantasy writer to bring it about, and because I put him a hell of a lot of time trying to get the science at least vaguely plausible.

4. …and which makes you cringe?
Because of the abovementioned imposter syndrome, it’s hard to start picking holes in my own stuff. I do look back on my earlier books and know that I’d write them better today. Empire in Black and Gold was very well received, but it definitely has issues, not least that there’s a metric crapton of exposition delivered in the first few chapters, in a setting that is relatively high-concept, and so entry to the setting and the series could definitely have been easier. 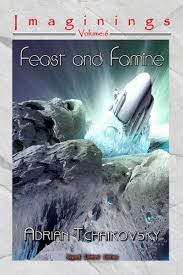 Irregular. I still have a part-time day job, so most of my writing gets done late evening – thankfully that’s always been my natural routine. However I now get a day and a half of additional writing time, and usually I try to get out of the house and away from distractions for that – a coffee house and a playlist of film score music make up my usual daytime writing environment.

6. Which piece of writing should someone who’s never read you before pick up first?
Entirely depends what they like. For the novels I’d say Guns of the Dawn is by far the lowest-concept and most accessible as a fantasy work, but Children of Time for people who prefer SF. For those looking for something shorter, then aside from the aforementioned Feast and Famine shorts collection, I’d single out maybe ‘Fragile Creations’ from Fox Spirit’s Tales of Eve or ‘Family Business’ from the Alchemy Press Book of Urban Mythic. A new Shadows of the Apt collection, Spoils of War, also from Newcon, came out in July, and that’s going to be a very good introduction to my most well known setting. 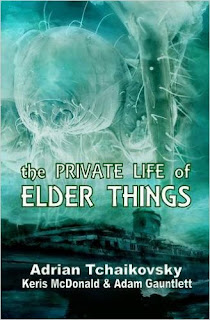 7. What are you working on now?
I’m currently writing the third and last volume of the Echoes of the Fall series that began with The Tiger and the Wolf, whislt simultaneously editing the second volume (to be released early 2017). At the same time I have a number of projects that will see fruition this year. There’s Spoils of War mentioned above, and hopefully Alchemy will be bringing out a Lovecraftian story collection, The Private Life of Elder Things, late in the year, which I’ve written with Keris McDonald and Adam Gauntlett. In August Tor.com released a standalone novel, Spiderlight, which is deconstructionist fantasy quest novel (!). Beyond that, I have various other projects, from drawing board through to complete manuscripts, which are still looking to find a home.
Posted by Simon at Monday, August 29, 2016