The Lowdown with... Rosanne Rabinowitz 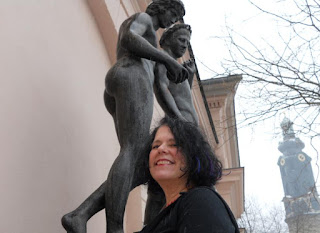 Rosanne Rabinowitz lives in South London where she engages in a variety of occupations including freelance editing, copywriting and care work. Her novella Helen's Story was a Shirley Jackson Award finalist in 2014, and her stories have appeared in a variety of anthologies. She takes part in anti-austerity campaigns and also contributes non-fiction to union, community and campaign websites.

1. Tell us three things about yourself.
1. I like whisky. A lot.
2. I am definitely not the sporty type, but I did play on the girls' basketball team at school. While I loved shooting baskets, I was a lazy person who hated all that running around. So I cultivated a good hook shot, took up a position just under the basket and waited for people to pass the ball to me. Being tall helped too.
3. I believe I tested the first home computers in a temp job in 1981. The computers were brought into the testing room on a gurney, hidden by a tarp. It was all top secret! We would insert the disks and the machine went through a series of noisy operations, scrolls of code would appear and when the indicator blinked 'finished' at the bottom we took the disks out. The computers often broke down so we’d end up doing overtime, which involved reading and listening to music while waiting for the techies to tweak the machines. It wasn’t a bad gig. For years I thought we were testing Amstrads because of the thick disks we were used, but it's possible the computers were Commodores. 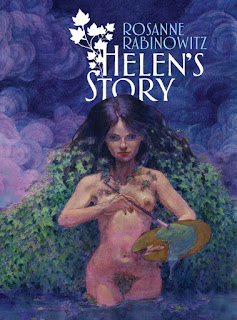 2. What was the first thing you had published?
First, I'll tell you about the very first thing that was accepted for publication. It would have been in an anthology of London-based lesbian and gay writers published by a now-defunct independent called Brilliance Books. The editor who accepted it was Jeanette Winterson. Despite her previous reputation to the contrary, I found her very pleasant when we spoke on the phone. I was paid £30 for the story. Then the anthology was cancelled because of a political dispute among the contributors – some wouldn’t appear in a book with certain other contributors. This was the ‘80s, remember. The publisher told me I could keep my £30, though. This happened many times – stories accepted, but the anthologies didn’t happen. One time I wrote to a US-based editor after six months' silence: “What happened? Has the publisher gone bust?” "Not quite. He was busted… for transporting fire arms over state lines". As for the first time a story saw the light of day, “Maza Zoftig” was published in The Slow Mirror: New Fiction by Jewish Writers (Five Leaves Press) in 1996. That’s the earliest publication listed on my website. OK, I've had a few stories published before that. See "What makes you cringe". And if you're talking about 'things' rather than 'fiction', I did publish a lot of non-fiction in a radical women's 'zine called Bad Attitude around the early to mid-1990s, and before that I was involved with a little 'zine called Feminaxe. 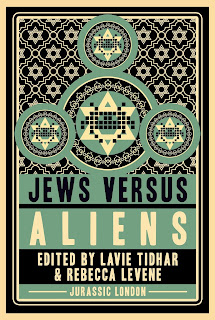 While I like most of my published stories, the ones I take the most pride in are those that took a lot of work, research and thought. They're stories that bring disparate strands of history and time together. Such tales can be a hard slog to create, but once it's done I'm very pleased. I'd say that my novella Helen’s Story (PS Publishing) is in that category. A 2009 novelette In the Pines, in Extended Play (Elastic Press) meant a lot to me too. However, some technical aspects of a ‘near future’ section set in 2015 is now somewhat slightly cringifying. I'd like to get this story reprinted in some form, but I'll have to get my gadgets right in the last section! More recent stories I’m very fond of are "Bells of the Harelle" in Tales from the Vatican Vaults, "The Matter of Meroz" in Jews Vs Aliens, and "The Lady in the Yard" in Soliloquy for Pan. At the opposite end of the spectrum, I was recently pleased to produce a 2000-word story about Universal Credit, quantum computing and multiversal weirdness, which appeared in a charity anthology We Need to Talk. This was a first for me – a proper short short story, when many of my stories tend to be in the 10,000+ range. I think using Twitter must have trained me – who knows? Maybe I'll try some flash fiction just for the hell of it.

4. …and which makes you cringe?
Some of the stuff I wrote in the 80s and early 90s. Maybe it wasn't really that bad, but I can't face rereading those pieces to find out. 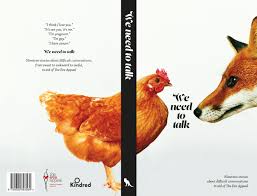 5. What’s a normal writing day like?
I initially spend some time drinking coffee, reading, kind of preparing myself... and trying to not get too distracted by the internet. As for what happens later, it depends a lot on deadlines and we’re I’m at with a project. I do write at night as well, often while I’m watching a film or IPlayer. I like to have background noise and something to look at while I mull a plot point or image over. I also do social media work for a campaign group, so I try to combine the two in a writing day. When I'm on a job where I go out to work, I usually make notes or do some editing in the evening… unless I go out to get 'inspired' somewhere.

6. Which piece of writing should someone who’s never read you before pick up first?
Going for a shorter piece of around 5000 words, I’d suggest "Survivor’s Guilt", [reviewed here by Peter Tennant] published in Black Static and reprinted in the Never Again anthology. This story grew out of many of my historical concerns and themes, and its Central European atmosphere is an element in much of my writing too. 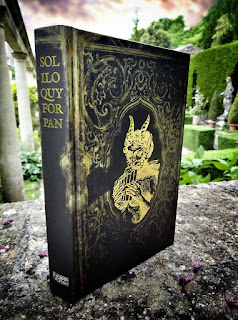 I have several stories on the go. I’ve also been working on a novel Heretics, which I keep putting aside when I have short story deadlines. It’s about a woman leader of a heretical sect in 15th-century Bohemia, which was big on sexual liberation and class warfare. "Bells of the Harelle", mentioned above, is actually a 'prequel' to this.

Meanwhile, other novel ideas keep popping up. One takes off from a few short stories I've already written, set in the changing landscape of North Lambeth (Arthur Machen was very disparaging about South London, but he was wrong about that). I'm also working on a piece – which could become part of a novel – that takes place in an alternate world where the German revolution of 1919 had more success, the Nazis never came to power and large swathes of people live in a libertarian socialist society of sorts. Perhaps this book will explore similar contradictions to Ursula LeGuin’s The Disposessed, but it will take place on a recognisable Earth.
Posted by Simon at Monday, August 22, 2016