The Lowdown with... Tom Fletcher 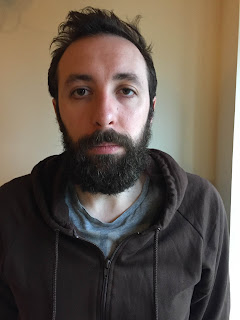 Tom Fletcher was born in 1984 and studied Creative Writing at the University of Leeds. His first novel, The Leaping, was published by Quercus in 2010 and shortlisted for the 2011 British Fantasy Society Best Novel award.The Thing on the Shore (Quercus) was published in 2011, and The Ravenglass Eye (Jo Fletcher Books) in 2012. His first fantasy novel, Gleam, was published by Jo Fletcher Books in September 2014, and he is currently working on its sequel. His short stories have been published by Comma Press, Flax, Nightjar Press, Paraxis.org, The Big Issue in the North, PS Publishing, Two Ravens Press, Centipede Press, Obverse Books, and Spectral Press, amongst others.
Tom lives in Cumbria, tweets here and has a website here.

This is the kind of question that should be fun to answer, right? Like, I could make things up. Or use it as an opportunity to make people aware of those things that I wish people knew about me. I know that sometimes I think, 'Oh, I wish people knew [xyz] about me. Then they'd understand. Maybe they'd even buy my books.' But right now I can't remember what [xyz] might be. I can't think of much, to be honest. I'm boring. But the truth about boring people: there aren't any. There are private people, who don't much care whether others find them interesting or not. I'm quite a private person, I guess. I think this is a problem as an author in 2016; like, I think it makes me bad at social media and marketing myself. At expending lots of energy either revealing myself, or creating an internet self.


c) All my books are brilliant, like...seriously. Compelling but also deeply relevant to your own personal situation. You'll laugh, you'll cry, you'll identify. You'll be sick, you'll find the protagonists sympathetic (but not too sympathetic) and you'll be a better person after you've read them (unless you're deep-down irredeemably bad, in which case you won't enjoy them and I don't even want you reading them anyway).

Technically, a poem when I was at primary school. It was called 'The Picnic Nicker', about a man made of food who'd steal your picnic. Time to come clean though...it was a collaborative effort, written with my parents, and probably should not have been published as the work of a nine year old. Or...I can't remember how old I was, how old that fictive poet was.

As an adult, a story called 'The Big Drift'. I wrote this at university, for the Science Fiction, Fantasy and Horror module (a v good module, obviously, taught by Dr Stephen Keane, who writes non-fiction that I recommend). Then submitted it to Comma Press after I graduated...they were putting together an anthology of new (i.e. unpublished) writers. (I didn't declare 'The Picnic Nicker'). It's about an astronomy enthusiast who alienates his family.

There are sections in THE LEAPING that I wrote in an unthinking kind of way that I really love. Actually, that goes for all my novels. I can write short stories in this way too; 'A Steak For Don', published by Flax Books in an anthology called 'Before The Rain' is one I'm proud of. Recently, Nightjar Press published 'The Home' which I'm very proud of. I couldn't tell you what it's about, because I don't know.

That unthinking way of writing is what people call 'flow', I guess. Though I prefer Michael Stipe's phrasing - he talks about his 'vomit songs', that just spill out with little or no effort. I'm probably proudest of my vomit stories. When I've figured out how, I'm going to write a vomit novel, and that'll be it, that'll be my Best and Final Work.

All of it, everything. I can't explain how I'm simultaneously proud and ashamed of all my published writing, but I completely 100% am.

It doesn't matter what time I get up, it always feels too late. I have to shower, get ready etc...I can't work in pyjamas or in bed or anything. I try to make the room nice (I don't have a work room, I'm normally at the dining table or a desk in the corner of the living room or something). Coffee, etc. Then sit at the laptop and plug away, feeling increasingly despondent, feeling increasingly like my ham-fisted prose is a total betrayal of the wondrous scenes and stories in my head. I normally give up in a rage at about 6pm. 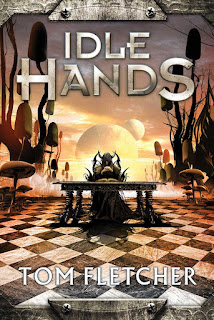 I don't really have regular writing days though - I tend to take a week or so off work at a time, and have a writing week, each day as described above. In between I make notes and plan things out and just jot down a couple of hundred words here and there.

There are two strands to my work now - Largely Horror, and Largely Fantasy. If you're interested in the former, go for THE LEAPING. If the latter, go for GLEAM. But my sincere advice is to start with both.

I've just delivered the sequel to GLEAM, which is called IDLE HANDS. While I'm waiting for the edits on that, I'm making the first tentative steps into the as-yet-untitled third book. The whole trilogy is kind of knockabout adventure...The Dark Crystal-meets-Tarantino-meets-Tank Girl-meets-Tom Waits. Hopefully with something to say about our work culture too.
Posted by Simon at Tuesday, May 24, 2016