The Lowdown with... Duncan Ralston 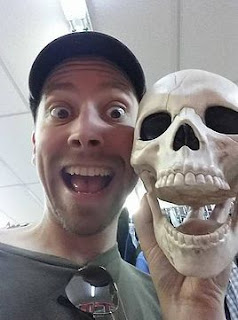 Duncan Ralston was born in Toronto in 1976, and spent his teens in small-town Ontario. As a “grown-up,” Duncan lives with his girlfriend and their dog in Toronto, where he writes dark fiction about the things that frighten, sicken, and delight him. In addition to his twisted short stories found in GRISTLE & BONE, the charity anthology THE BLACK ROOM MANUSCRIPTS (Sinister Horror Company), Extreme Horror Author Matt Shaw's EASTER EGGS & BUNNY BOILERS, DEATH BY CHOCOLATE (Knightwatch Press), and THE ANIMAL (Booktrope) his debut novel SALVAGE is available now. Upcoming works include the novellas WOOM (a "Black Cover" book from Matt Shaw Publications) and EVERY PART OF THE ANIMAL (Shadow Work Publishing). 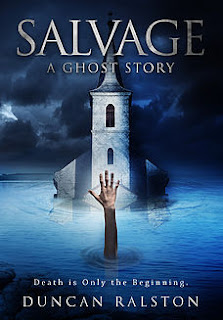 I’ve worked behind the scenes in television for over ten years, but not in writing. I’ve written several pilot scripts (one of which has received awards) and spec scripts (my favorite is for the USA Network series Psych—a show cancelled shortly after I finished writing my spec episode, called Dial M for Mustache… Also Murder, involving a poisoning at a mustache convention). As yet, I haven’t had anything produced.

In 2014, I stupidly stumbled into a Twitter beef with Dan Harmon (creator of Community, a show I enjoy a fair bit), during which he visited my blog and flamed my “free Canadian ebook.” Very shortly after this, I gained a blog stalker who pops up every now and again to tell me I suck and should quit writing. Based on prior behavior, I’m half-convinced it’s Harmon.

A really great story moment in a movie or TV show makes me choke up a bit. Reading a book, it just gives me chills. I guess it’s because one is a more cerebral experience and the other is more emotional.

2. What was the first thing you had published?
I self-published a short story, “//END USER,” in the spring of 2013. Originally I’d wanted to send it out to publishers, but I saw a trailer for the movie Her, and worried there would be enough similarities people might think I’d ripped it off. Although they both feature artificial intelligence with a female voice, it turned out the two couldn’t be more different. I love Her, but I wish it hadn’t come out when it had, because it might have been my first short story sale. That being said, it works quite nicely as a bit of darkly comic relief in Gristle & Bone, the first book I’ve had published by a genuine publisher, Forsaken.

My first novel, Salvage. I’m very pleased with the amount of praise Gristle & Bone has gotten, but Salvage is a deeply personal book, and a story that had been percolating for years before I finally took a stab at it. For the most part, it’s been getting good feedback. Which is nice, because I was worried no one would like it.

My actual first novel, The Midwives. I blasted through the 90,000-word first draft in three months with no outline and only a few ideas of where it would go. It’s pretty messy. I’m not even sure if several of the secondary characters (the eponymous midwives) have been correctly named throughout. There are some decent moments in it, but it needs a major overhaul. I’ll go back and rewrite it at some point, make it into something worth reading... for now, it’s just a really heavy stack of paper with some ink stains that resemble phrases.

5. What’s a normal writing day like?
Trying to get into something that will hold my attention with all the many distractions! I usually do my social media stuff in the morning, get it out of the way, then write for a few hours before work. On a weekday off, I’ll write most of the day, and try not to forget to eat and walk the dog. 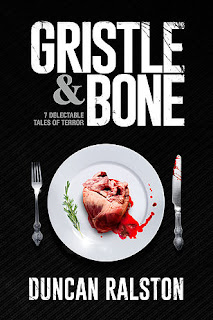 I’ve got a couple of short stories coming out in some really exciting anthologies in the first half of the year, filled with an excellent assortment of talented writers.

Currently, I’m working on a top-secret project with the gentlemen at The Sinister Horror Company that’s turning out to be very scary and fun. I’ve also just signed with the inimitable Matt Shaw for an extreme horror novella which should prove to be my sickest story yet.

Aside from that, I’m also planning to finish off a couple of horror novels I started last year (my girlfriend might literally kill me if I revealed any details), along with two psychological horror novellas, Every Part of the Animal and The Method. I hope to publish them all, or have a publisher secured for them, by the end of 2016.
Posted by Simon at Monday, May 02, 2016