The Lowdown with... Mercedes M. Yardley 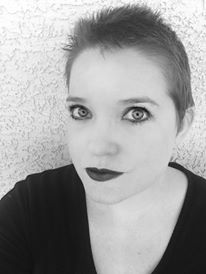 Mercedes M. Yardley is a dark fantasist who wears red lipstick and poisonous flowers in her hair. She is the author of Beautiful Sorrows, Apocalyptic Montessa and Nuclear Lulu: A Tale of Atomic Love, and Pretty Little Dead Girls: A Novel of Murder and Whimsy. Mercedes lives and works in Sin City, and you can reach her here.

1. Tell us three things about yourself.
Three things. Let’s see. We have a new puppy. He was a stray who ended up in our back yard, bony and afraid. We searched for owners for a month, but he didn’t have any identification on him and nobody stepped forward, so he’s ours now. His name is Window Cobblepot, Prince of Barkness, and he’s a glorious thing. I love my puppy. That’s the first thing.
The second is that I’m absolutely in love with dark fantasy. I grew up on a steady diet of books and movies that were both sweet and frightening. Take something innocent and add a knife to it. Have a terrifying monster but let him fall in love. That’s what I like.
The third thing is that I took a deep breath and shaved my head a few months ago. It was a wonderful, empowering experience, and I’m so glad I did it! It changed the way some people treated me. It opened my eye as to how much women really are judged by appearance. But I loved it. Now it’s in a weird growing-out stage, as you can see by my picture. But I’m enjoying every aspect of it.

2. What was the first thing you had published?
My first published piece was a flash fiction story titled Show Your Bones. It’s about a young woman who grows up in the public eye, and she chooses to starve herself. Instead of helping her, society calls her beautiful and puts her picture on magazines. It was very much a statement.
I sold it to THE VESTAL REVIEW for twelve dollars, and it was the best check I ever received. I was so proud! It was such a hallmark.

3. Which piece of writing are you proudest of?
My favorite piece is a novel titled Pretty Little Dead Girls: A Novel of Murder and Whimsy. It’s a fairytale with a high body count, about a girl who is destined to be murdered. Despite the dark premise, it’s a very cheerful tale that tends to leave the reader feeling good at the end. It’s about love and standing together against obstacles. And the serial killer in the book is just a dear.
I left my publishing company last year, so PLDG was pulled from print. But it will be re-released in February with Crystal Lake Publishing, and I’m so excited about that! I can’t wait to have it out in the world again.

4. …and which makes you cringe?
Ai yi yi. I had a few very amateur pieces put out in an anthology very early on. The work was shoddy, they were written under duress, and they were unoriginal. The editor shouldn’t have accepted them. Then again, the editor put some typos in that weren’t there originally, and misspelled my name in two different ways. I don’t think the book is in print anymore, and that’s fine with me. Yikes!

5. What’s a normal writing day like?
Every day is a writing day. Each morning starts by getting the three kids up and the older two out the door to school. Then it’s time for errands and some house work, with the littlest child by my side. I leave the computer up all day and write 15 minutes here and 15 minutes there. I quite literally have my daughter on my lap while I type. I do this all day long, and finally shut everything down at about 10 pm. I have some major deadlines within the next few months, so I’ll be doing concentrated writing after the kiddos go to bed. Usually that’s when my husband and I kick back and relax with a movie, but I’ll have to forgo that until I get things finished. 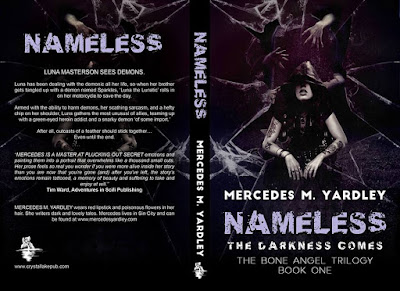 6. Which piece of writing should someone who’s never read you before pick up first?
Great question! I’d say if that if the person wants something dark and snarky, they should pick up Nameless: The Darkness Comes. [OUT NOW!] It’s an urban fantasy about a girl who sees demons, and there’s a lot of humor in it. It’s the first book in a trilogy. But if they want to really see my style and can stomach it, I’d suggest my novella Apocalyptic Montessa and Nuclear Lulu: A Tale of Atomic Love. It’s a love story between two very special, broken people. Think Romeo and Juliet meets Stephen King’s Firestarter, and you’ve got it. This book will also be re-released in February, and I’m so glad. It’s one of my favorites.

7. What are you working on now?
Oh, wow. Right now I’m in a bit of a crunch. I’m currently working on six short stories, a novella, and two novels. Nameless: The Darkness Comes will be republished in December 2015. The following two sequels will come out shortly after in 2016. They’re my main priority right now. After that, I have a dream novel I’ve been dying to write. I plan to start her after I clean my plate now. So it’s a busy year, and I like that. Writing makes me feel alive.
Posted by Simon at Monday, December 14, 2015

Thank you so much for this, Simon! It was a pleasure. :D