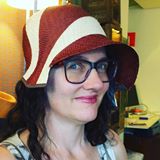 A.M. DELLAMONICA is the author of Indigo Springs, which won the Sunburst Award for Canadian Literature of the Fantastic. Her short fiction has appeared in Asimov’s, Realms of Fantasy, Sci-Fiction and Strange Horizons, and in numerous anthologies; her 2005 alternate-history Joan of Arc story, “A Key to the Illuminated Heretic,” was shortlisted for the Sideways Award and the Nebula Award. Dellamonica lives in Vancouver, British Columbia.


1. Tell us three things about yourself.
1. I am a Toronto, Ontario writer with four books to my name, a fifth novel coming out this December, and forty short stories in print. My work has been translated into Polish, Hebrew, and (I hope to announce soon) Italian! My first novel, INDIGO SPRINGS, won the Sunburst Award for Canadian Literature of the Fantastic and my most recent, A DAUGHTER OF NO NATION, won the 2015 Prix Aurora for best novel, in the same year that my wife, Kelly Robson, won the Aurora for short fiction for her outstanding novella "Waters of Versailles." 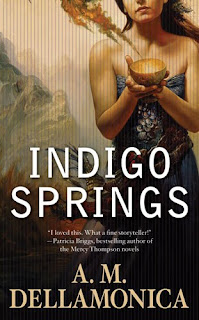 2. I have never learned to enjoy the process of shopping for shoes.
3. My biggest problem in life right now is deciding if I can wait on an an amazing local tattoo artist, to work with me on the poppies I want to put on my right shoulder, in celebration of the incredible year I've had. She's booked through to the end of 2016. I’m keen in part because I feel it is always important to notice when things are going so well that your greatest source of angst is over when and how you're going to get your next bit of celebratory body art. If you don't pay attention when things are good, you run the risk of seeing your life as a vale of tears.

2. What was the first thing you had published?
Excluding student newspaper-type publications and contests wins, my first fantasy story appeared in Crank! Magazine in 1991 and was called "Lucre's Egg."

3. Which piece of writing are you proudest of?
My Hidden Sea Tales trilogy is wrapping up this December with THE NATURE OF A PIRATE, the follow-up to A DAUGHTER OF NO NATION. It is an ambitious project, set on a world with over 250 island nations, each with their own microclimate and proprietary magic system. The books are funny, romantic, adventurous crime stories. I bit off a lot with them, but I think--perhaps for the first time--it was never quite more than I could chew. I love the world, Stormwrack, that they're set in and I hope to write many more things set in that realm, using those characters and countries. 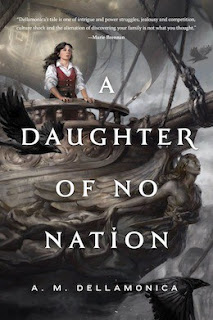 4. …and which makes you cringe?
I'm not sure there's anything that makes me cringe, precisely. I'm not sorry that I started publishing stories before the days when everything was electronically archived. I'm so much better now that I'm not entirely unhappy that my freshman efforts, like "Lucre's Egg," are a little more difficult to access. That said, they represented the best writing I could produce at the time, and even if 2016 Alyx looks at them askance, that doesn't mean they're without value. If you aren't a little appalled by your work of two decades ago, it may mean you aren't getting better.

5. What’s a normal writing day like?
At 6:30 every morning I sit down to do a little teaching and correspondence, to wake up and clear my mind and schedule. By 8:00 a.m., I am in a cafe near my home, drinking coffee and writing fiction. Depending on how that goes, I segue into exercise and errands between 10:00 a.m. and 11:00. My afternoons are more flexible: sometimes I work on revising fiction, sometimes I need to do more teaching, sometimes I have administrative work, non-fiction to work on, or I have appearances to prep for--convention panels I'm moderating, lectures I'm giving, etc. This phase of the day bleeds into dinnertime and, sometimes, afterward into the evening. 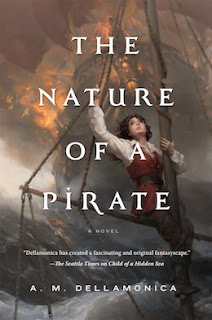 That really depends on what kind of fiction they're looking for, but it's hard to go wrong with one of my Tor.com stories, which are all free to read at their site and handily gathered here.  If you like urban fantasy, there's my baby werewolf has two mommies story, "The Cage." If you want to sample Stormwrack there are three prequels to the Hidden Sea Tales books: "Among the Silvering Herd," "The Ugly Woman of Castello di Putti," and "The Glass Galago" respectively. If you're curious about my previous series, The Books of Chantment, "Wild Things" is a tie-in to that. Or there's a horror stand-alone, "The Color of Paradox."

7. What are you working on now?
I am simultaneously working on two related works. One is a novella set forty years from now, in a Toronto weathering the early years of a climate crisis known as the Setback. The other is a novel set a generation later, during a period of (what's hoped to be) ecological recovery. They're near-future greenpunk, with a heavy emphasis on the future of social media, and the latter is also a first contact book. The novella, "Of Things," is very dark, but the novel, GLORY DAYS, is more optimistic.
Posted by Simon at Sunday, November 13, 2016