The Lowdown with... Carole Johnstone 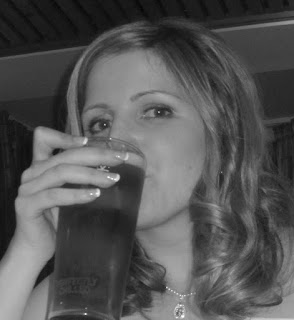 Her fiction has also been reprinted in many Best Of anthologies, including Ellen Datlow's Best Horror of the Year, and Salt Publishing's Best British Fantasy series. Her novella, Cold Turkey, and debut short story collection, The Bright Day is Done, were both shortlisted for 2015 British Fantasy Awards.

More information on the author can be found at her website.

1. Tell us three things about yourself:
I LOVE beer. (Hence the photo). But ninety-nine point nine percent of the time, I drink wine instead. Because beer does not love me.

I collect medieval weaponry, the bigger and uglier the better. I buy most of it from museum auctions, so that I know I’m not paying often ridiculous amounts of money for something that’s been cobbled together in someone’s shed. My pride and joy is a huuuge iron battle axe head from the Black Forest.

I once picked the balls out of the bag live on Scotsport for the Scottish Cup. It was the single most terrifying moment of my life.

2. What was the first thing you had published?
It was a short story called 'The Morning After', and it was published in Black Static #3, back in 2008, I think. A very short, very simple story with a very predictable twist, but I still have a soft spot for it all the same.

I’ve just finished a dark psychological thriller called The Love of My Life, and I’m hugely proud of that, but as it hasn’t been published yet, I’ll choose my 2014 BFA-nominated novella, Cold Turkey. It’s about a guy who tries to give up smoking, but finds that the side-effects of going cold turkey are far more horrific than he’d been expecting. I wanted it to be all things: scary and sexy and funny and moving; a love story and a horror story, a cautionary tale. Whether anyone actually thinks that it’s any or all of those things is, of course, entirely beyond my control. I was trying to give up smoking myself at the time – which proved entirely beyond my control too.

And I recently had a short called 'There You’ll Be' published in the anthology, Terror Tales of the Scottish Highlands, that I’m pretty proud of, if only because it was a pretty big departure for me, and probably the most personal thing I’ve ever written.

4. ...and which makes you cringe?
My first longer work was a novella called Frenzy, published back in 2009. It’s a story about a group of survivors adrift on the Pacific over the Mariana Trench, at the mercy of the elements, sharks, and each other. And the something waiting in the abyss beneath them.

I don’t hate it – I probably shouldn’t say so, but I’ve never hated anything I’ve had published – although it is very overwrought and overwritten. I was channelling at least half a dozen other – better – writers at the time. Plus, the ending is horribly ambiguous, with little or no resolution at all – the kind of book that I, as a reader, would want to hurl across the room in frustration. Weirdly, this didn’t occur to me at the time.

There are still elements that I like, and I can see what I was trying to do; if I went back now, I’d do a far better job of it. I’ve always had a tremendous sense of fascination/terror for the deep ocean, and just adore the whole lost and alone on the alien sea narrative, so maybe one day I will!

5. What’s a normal writing day like?
Well, I work pretty much full time, so I write when I can, usually in the evening and at weekends. I do have rituals: I read something similar to what I’m writing to get into the mood; I listen to classical music, mostly movie soundtracks (unless I’m editing – then it’s nothing); erm...wine. If it’s going badly, vodka. Very badly, beer. I’ve given up smoking now, but e-cigs are a constant writing companion.

I’m not the kind of writer who can grab a few moments here and there: on the tube, in my lunch hour etc. I have to be all the way down in it. Often I’ll write for seven, eight hours straight, sometimes until dawn, and although not all of it will be any good, it’s definitely my most productive way of working.

7. What are you working on now?
Having just finished a novel, I’m enjoying writing a few shorts just for me: no commission, no theme, just whatever I feel like, which is great. I’ve also just finished a long short/short long, which is a bit Taggart meets True Detective, and I can’t remember when I last had such a blast writing anything.

I’m planning on starting work on a new novel in the new year. A dark psychological thriller set in Edinburgh, about two very different twin sisters. I’ve got it all pretty much plotted out, so can’t wait to get stuck in.

I’ve also got a couple of pretty major decisions to make next year writing-wise, so watch this space!
Posted by Simon at Friday, April 01, 2016

I got my first electronic cigarette kit on VaporFi, and I enjoy it a lot.